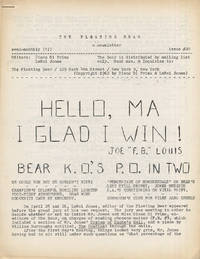 Born out of the horror and discontent of World War Two, the Beat Generation was a community of writers, poets, and authors that became highly influential in American society. Among the best-known Beat writers were Jack Kerouac and Allen Ginsburg, but there were many others as well.

William S. Burroughs, the author of the highly controversial work Naked Lunch, was a particularly interesting and, quite frankly, morbid, member of the Beat Generation. Burroughs accidentally killed his wife by playing a poorly thought-out game of William Tell and he stated that it was only through the act of killing her that he was able to become such a prolific writer. While such a statement is certainly audacious and maybe a bit appalling, few can deny his creative genius. Of course, Naked Lunch was the subject of a tawdry obscenity case in 1966, and the book was even banned for four years in Massachusetts.

The Beat Generation reinvented art forms and brilliantly showcased the personal atrophy that many people felt the devastation of World War Two. One of the most persistent critiques of the Beats was the apparent sexism in many of the female characters and the overall lack of women writers. Academic scholars have discussed at length the possible reasons for this phenomenon, but there were several women authors of note among the Beats, including Joyce Johnson, author of Bad Connections.

The Beats continue to exert considerable influence on today’s literary scene, and Biblio sellers have a fantastic collection of Beat Generation books and ephemera available below.