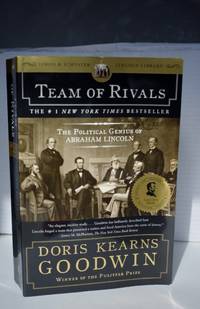 Team Of Rivals The Political Genius Of Abraham Lincoln

Team Of Rivals The Political Genius Of Abraham Lincoln

Simon & Schuster, First Soft Cover, 09//26/2006, 2006. Simon & Schuster (Sep 26, 2006). Near Mint, black bacground with gold lettering, great pictures on front cover. NEAR MINT/no DJ as issued. This brilliant multiple biography is centered on Lincoln's mastery of men and how it shaped the most significant presidency in the nation's history.
In 2006, the book was awarded the Lincoln Prize, "awarded annually for the finest scholarly work in English on Abraham Lincoln, the American Civil War soldier, or a subject relating to their era".[14][15] On March 29, 2006, Goodwin was announced as the winner of the $50,000 Book Prize for American History of the New-York Historical Society.[16] Team of Rivals was also a finalist for the National Book Critics Circle Award and the Los Angeles Times Book Prize. (wiki).
While consulting on a project for director Steven Spielberg in 1999, Goodwin told Spielberg she was planning to write Team of Rivals, and Spielberg immediately told her he wanted the film rights.[22] DreamWorks finalized the deal in 2001,[23] and Goodwin sent Spielberg the book chapter by chapter as she composed it.[24] Daniel Day-Lewis agreed to play Abraham Lincoln after Liam Neeson, the original lead, withdrew from the project in 2010.[25] The screenplay was written by Tony Kushner, who was nominated for an Academy Award for Best. Ten pages of B/W photos. A Great History Book. Simon & Schuster, First Soft Cover, 09//26/206. Near Mint, black bacground with gold lettering, great pictures on front cover. Team of Rivals is the sixth book by American historian Doris Kearns Goodwin. In 1995, Goodwin was awarded the Pulitzer Prize for History for her book No Ordinary Time: Franklin and Eleanor Roosevelt: The Home Front in World War II, a similar study of personalities in the Roosevelt White House.

Seller rating:
This seller has earned a 2 of 5 Stars rating from Biblio customers.
Biblio.co.uk member since 2015
Nashua, New Hampshire
Ask Seller a Question

About YJS BOXES OF BOOKS

Our inventory offers a wide variety of interests: Rare and beautiful books, vintage as well as modern mysteries, thrillers, poetry, histories of people, places and things, all areas of politics, and curiosities ......
If more information is needed about any of our books, please do not hesitate to call or e-mail. We will get back to you in a timely manner.
Terms of sale for YJS BOXES OF BOOKS
30 day return guarantee, with full refund including original shipping costs for up to 30 days after delivery if an item arrives improperly or damaged.
YJS BOXES OF BOOKS specializes in Autobiographies and Biographies of the Rich and Famous, First and Signed First Editions, Historical: Non-Fiction and Fiction, People, Places and Things, Modern Mysteries and Thrillers, Rare and Vintage

near mint
a synonym for Near Fine.