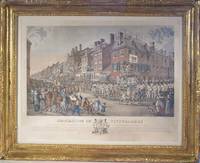 Philadelphia: Published by Joseph Yeager; printed by Charles Woodward, 1821. Engraving, etching and aquatint with hand-coloring and mezzotint on buff wove paper (plate: 50.5 x 66 cm.; image: 42.5 x 59 cm.). Second state, in which it is added that the view was "taken from M. Carey & Sons Book Store. S.E. corner of 4th and Chestnut Sts". There is no known extant copy of the first state, but it is referred to and described in Stauffer & Fielding's American Engravers upon Copper and Steel (page 556). "The procession of butchers with their carts carrying meat from a cattle market show was organized to encourage the breeding of cattle and attracted 300,000 people if the Philadelphia Gazette is to be believed. It took one hundred carts to carry 86,731 pounds of meat, including bear and deer meat. The butchers and victualers proudly flew their banner, 'We feed the Hungry.'" (Nash, First City: Philadelphia and the Forging of Historical Memory). ~ "[T]he most popular of local views in aquatint was the light-hearted genre scene, The Procession of the Victuallers. This is almost the only such local print of its time. Set in an atmosphere of happy holiday cheer, there is in it as well the appeal of dozens of figures drawn from Krimmel (1786-1821), whose simple charm in the flat planar medium is redolent of days long gone. The Procession of the Victuallers, drawn by Krimmel in the year of his death, 1821, was aquatinted by Joseph Yeager (c. 1792-1859) in his only engraving in that mode which has been found. This is lavish in size and in the crowded atmosphere typical of Krimmel... The Philadelphia Gazette of March 16, the day after the event, reported that 'What added considerably to the novelty and beauty of the scene, was the ascension of several handsome balloons during the line of march.' It has been said that the spectacle was witnessed by 300,000; the population of the city at that time was 127,000." (Snyder, Mirror of America). The 1904 auction catalogue of rare Americana from the estate of Moses Polock, "the oldest bookseller in the United States" included the original watercolor (later sold at Christie's New York in 2008 for $338,500), and the descriptions noted that it was "from this that the now very rare engraving was made." There is loss to the margins at the lower right-hand corner, and several closed tears intruding into the text or the image; paper restoration is subtle but visible. Some general discoloration, but the colors remain quite bright. Framed. Rare. [Stauffer & Fielding 3438ii].