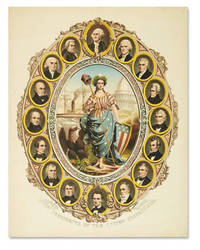 [Print]. Presidents of the United States

[Print]. Presidents of the United States

[Philadelphia]: Published by F. Bouclet, 1861. First edition. A very good copy, small, faint stain on left margin, minor edge wear with a few tiny tears, colors vibrant.. Sheet size: 27 x 21 (68 x 53 cm); image size: 24 1/2 x 18 3/4 (62 x 47.5 cm). Chromolithograph on wove paper. A large, patriotic, and symbolic print issued around the time of Abraham Lincoln's first inauguration containing a central allegorical scene surrounded by oval portraits of the first sixteen presidents of the United States, with George Washington at the top and a beardless Abraham Lincoln at the bottom which may explain why, though now a considered one of the most beautiful prints of the images of American Presidents, it did not sell, as the new president was sporting a beard, and not clean-shaven as he was when Matthew Brady took this image on February 27, 1860, the day of his speech at Cooper Union in New York. The print "both commemorates Lincoln's election and recognizes the challenges and opportunities facing the 16th president... The 16 presidential portraits encircle symbols of the republic at a time when a divided nation faced secession and civil war. In the center, Columbia holds a shield and liberty cap, the latter being a symbol both of revolution and of freed slaves. A bald eagle grasps arrows and an olive branch and carries a ribbon with the motto 'E Pluribus Unum.' The Capitol dome (shown completed at a time when it was still unfinished) symbolizes the founding of the democratic republic while a steamship symbolizes development and progress. The allegorical images relate to concepts that Lincoln expressed in his first inaugural address; that seceding and breaking the Constitution, would be a step backward, not forward, and violates the very principles of the Union, a Union which is 'older than the Constitution.' By commemorating Lincoln's election and illustrating the troubled and complex scene he faced, this chromolithograph encapsulates the spirit of Lincoln's presidency," Erin Mast, Curator ("My Abraham Lincoln" Exhibition at President Lincoln's Cottage Museum, 2009). OCLC locates only two copies, a Minn. Library and the Library of Congress. Reilly, American Political Prints: 1861-13.

First Edition
In book collecting, the first edition is the earliest published form of a book. A book may have more than one first edition in...[more]
New
A new book is a book previously not circulated to a buyer. Although a new book is typically free of any faults or defects,...[more]