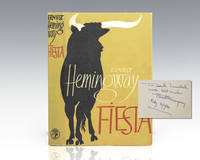 London: Jonathan Cape, 1955. Later printing of Hemingway's first major novel published as Fiesta in the United Kingdom. Octavo, original cloth. Presentation copy, inscribed by the author on the front free endpaper, "To Jack Lonsdale with best wishes Ernest Hemingway Ritz 10/9/56." On this date, Hemingway was in Madrid for a bull fight with his wife Mary. Very good in a very good price-clipped dust jacket, owner name. Rare and desirable signed and inscribed. The Sun Also Rises was published by Scribner's in 1926, and a year later in the United Kingdom by Jonathan Cape under the title Fiesta. Though it initially received mixed reviews, it is now "recognized as Hemingway's greatest work" (Meyers, 1985). The fictional plot depicts a love story between war-wounded and impotent Jake Barnes and the promiscuous divorcee Lady Brett Ashley, but the novel is a roman a clef; the characters are based on real people and the action is based on real events. Hemingway proposes that the "Lost Generation," considered to have been decadent, dissolute and irretrievably damaged by World War I, was resilient and strong. Naturally, themes of love, death, renewal in nature, and the nature of masculinity are heavily investigated. For example, the characters engage in bull-fighting, which is presented as an idealized drama: The matador faces death and, in so doing, creates a moment of existential nothingness, broken when he vanquishes the possibility of death by killing the bull (Stoltzfus, 2005). The Sun Also Rises is seen as an iconic modernist novel for future generations (Mellow, 1992), although it has been emphasized that Hemingway was not philosophically a modernist (Reynolds, 1990). "The Sun Also Rises is Hemingway's masterpiece--one of them, anyway--and no matter how many times you've read it or how you feel about the manners and morals of the characters, you won't be able to resist its spell. This is a classic that really does live up to its reputation" (David Laskin).

Fiesta: The Sun Also Rises tells the story of Jake Barnes, an expatriate living in Paris. He was wounded in World War I, and is now a journalist who spends his time drinking with other American expatriates.  The group of characters travel from Paris to Pamplona for the running of the bulls.

Cloth
"Cloth-bound" generally refers to a hardcover book with cloth covering the outside of the book covers. The cloth is stretched... [more]
inscribed
When a book is described as being inscribed, it indicates that a short note written by the author or a previous owner has been... [more]
octavo
Another of the terms referring to page or book size, octavo refers to a standard printer's sheet folded four times, producing... [more]
jacket
Sometimes used as another term for dust jacket, a protective and often decorative wrapper, usually made of paper which wraps... [more]