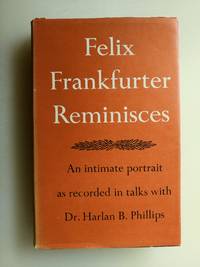 Felix Frankfurter Reminisces (*Signed by Graham Greene* with a gift inscription to his former dean and English constitutional law professor Sir David Keir): An Intimate Portrait as Recorded in Talks with Dr. Harlan B. Phillips

by Phillips, Dr. Harlan B

Hardcover. Non-Fiction. Memoirs. 310 pp. Secker & Warburg, London (1960). First Edition. First Printing (FPu). Clean, tight copy with no bumped corners and no markings inside or out. Near Fine/ Near Fine. The unique feature of the book, however, is the gift inscription on the front pastedown, all but hidden by the DJ flap. The book's gift inscription is from Graham Greene to his former constitutional law professor (and later dean) Sir David Keir at his alma mater Balliol College, Oxford University. The unique feature of the inscription is that it is written and signed in the looping cursive script of Greene's natural handwriting and legal signature; versus the printed hybrid script and autograph that he had adopted for public consumption at his booksignings. (Greene's upper-case G' s in his public and semi-private booksignings and inscriptions had evolved to more closely resemble lightning bolts or radically elongated, linear letter S's.) In reality, author Graham Greene was a champion of literate free speech, and a watchdog against the cinematic sexual exploitation of children. (Wikipedia): Henry Graham Greene (2 October, 1904 – 3 April, 1991), better known by his pen name Graham Greene, was an English novelist regarded by many as one of the greatest writers of the 20th century. Combining literary acclaim with widespread popularity, Greene acquired a reputation early in his lifetime as a major writer, both of serious Catholic novels, and of thrillers (or "entertainments" as he termed them). He was shortlisted, in 1966 and 1967, for the Nobel Prize for Literature. Through 67 years of writings, which included over 25 novels, he explored the ambivalent moral and political issues of the modern world, often through a Catholic perspective. Greene supplemented his novelist's income with freelance journalism, book and film reviews for The Spectator, and co-editing the magazine Night and Day. Greene's 1937 film review of Wee Willie Winkie, for Night and Day – which said that the nine-year-old star, Shirley Temple, displayed "a dubious coquetry" which appealed to "middle-aged men and clergymen" – provoked Twentieth Century Fox successfully to sue for £3,500 plus costs, which resulted in the magazine folding, and Greene leaving the UK to live in Mexico until after the trial was over. By the 1950s Graham Greene was generally acknowledged as one of the finest writers of his generation. More photos on request. *Due to the price, scarcity, or other features of this item, it will not be shipped. Consummation of the sales transaction requires a personal meeting between the seller and buyer (or buyer's agent) at BookRanger's Monroe, GA facility, or other location amenable to both buyer and seller (or their respective agents). The 30-day right of return is therefore waived, in light of this personal inspection of the item at the point of sale.* Make an offer; all offers entertained in good faith.

Seller rating:
This seller has earned a 5 of 5 Stars rating from Biblio customers.
Biblio.co.uk member since: 2017
Maysville, Georgia
Ask Seller a Question

When viewing book listings on the BookRanger site at biblio.com, you might notice a frequent redundency of descriptive terms such as "clean", "bright", "square", and "unmarked".
This is because we do not buy books blindly in mass purchases. All of our books are hand-picked for such qualities as condition, subject matter, scarcity, and overall appeal. On rare occasions, a book's physical condition may fall below our normal standards, due to scarcity of the particular title or edition. In any case, we make every attempt to use only the descriptive terms which accurately depict the particular book offered for sale.

First Edition
In book collecting, the first edition is the earliest published form of a book. A book may have more than one first edition in...[more]
tight
Used to mean that the binding of a book has not been overly loosened by frequent use.
fine
A book in fine condition exhibits no flaws. A fine condition book closely approaches As New condition, but may lack the...[more]