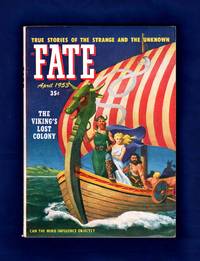 Evanston, IL: Clark Publishing Company, 1953 Evanston, IL: Clark Publishing Company, 1953. The April, 1953 issue of Fate Magazine (issue no. 37) in Raymond A. Palmer's now-legendary paranormal-reporting non-fiction enterprise, which began with, in its first issue, Kenneth Arnold's cover account of flying crescents which "skipped like saucers across a pond", an event which, for whatever reason, kicked off the modern era of UFO events. After that, Fate introduced countless events which remain, to this day, fodder for paranormal documentaries and investigation. 12mo, illustrated perfect-bound wraps, 130 pp. A very, very Near Fine example, with no salient flaws whatsoever; even the spine is complete and bright, with a tiny (1/2 mm) tag at bottom. See scans. As always, modest age-toning to the newsprint paper pages, which remain supple. In superb condition for a periodical which often shows substantial wear from use. Cover art, uncredited, shows a doughty-looking red-bearded Viking leader, a la Erik the Red, with his comely blond First Officer right at hand, depicting one of the lead pieces, "The Viking's Lost Colony". See the scanned image of the contents page for all of the articles herein, which cover, in addition to the Viking account, such topics as Magdalene Grombach; Opal Whiteley; Caodaism; Possession; a woman who sings in Ancient languages; Witches; Automatic (Subconscious) Writing; a Ghost Ship; and of course much, much else, including the standard Departments, always engrossing in themselves, all on various other paranormal or inexplicable phenomena. Interior art and photography is largely uncredited. A piece of paranormal history, and an example of a unique branch of Americana, in very highly collectible condition. Please see scans. L82

spine
The outer portion of a book which covers the actual binding. The spine usually faces outward when a book is placed on a shelf....[more]
fine
A book in fine condition exhibits no flaws. A fine condition book closely approaches As New condition, but may lack the...[more]
12mo
A duodecimo is a book approximately 7 by 4.5 inches in size, or similar in size to a contemporary mass market paperback....[more]