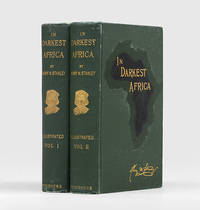 In Darkest Africa: Or the Quest, Rescue, and Retreat of Emin, Governor of Equatoria.

New York: Charles Scribner's Sons,, 1890. 2 volumes, octavo (220 x 143 mm). Original green pebble-grain cloth, titles and Stanley's bust gilt to spines, front boards lettered in gilt with silhouette of Africa blocked in blind and partially filled in black, brown endpapers. Photogravure portrait frontispiece to each volume, 52 engraved plates of which one in colour (the sketch of Ruwenzori in volume 2), numerous illustrations to the text, 3 folding colour maps in end-pockets, that in volume 1 opening to approx. 60 x 80 cm. Ticket of the Publishers and Booksellers Protective Association to the rear free endpaper of volume 1. Some light rubbing to extremities, trivial pale mottling to covers, section of superficial cracking to rear inner hinge of volume 1, maps with a few short splits along folds and small closing holes at intersections of folds. An excellent copy in the attractive original cloth, unique to the US edition. First US edition, first printing. Stanley's famous account of his expedition to relieve Emin Pasha (Eduard Schnitzer), the beleaguered Ottoman governor of equatorial Sudan, contains some of his most celebrated writing, especially his account of the tortuous 450-mile passage through the dense Ituri rain forest. Stanley's dealings with Emin Pasha, who proved singularly resistant to being "rescued", his abandonment of his own rear column and his wider motives for his mission have all come under suspicion then and since, but the book remains a classic of African exploration. In the course of the journey Stanley met Roger Casement, then in service on the Congo, discovered the great snow-capped range of Ruwenzori, the Mountains of the Moon, a new lake which he named the Albert Edward Nyanza and a large south-western extension of Lake Victoria. First published in 1890 (in London), In Darkest Africa was quickly translated into French, German, Italian, Spanish, and Dutch, while sales of the English trade editions reached 150,000 copies. Howgego IV S60; Speake pp. 1132-35.

In Darkest Africa (1890) is Henry M. Stanley’s own account of his last adventure on the African continent. At the turn of that century, the interior of the African continent was largely unknown to the American and European public. With the accounts of great explorers like Stanley, readers became thrilled by stories African expeditions and longed to follow in the footsteps of these explorers. In 1888, Stanley led an expedition to come to the aid of Mehmed Emin Pasha. The two volumes that compose In Darkest Africa; or, The Quest, Rescue, and Retreat of Emin, Governor of Equatoria are his account of what happened.

hinge
The portion of the book closest to the spine that allows the book to be opened and closed.
Cloth
"Cloth-bound" generally refers to a hardcover book with cloth covering the outside of the book covers. The cloth is stretched...[more]
rubbing
Abrasion or wear to the surface. Usually used in reference to a book's boards or dust-jacket.
octavo
Another of the terms referring to page or book size, octavo refers to a standard printer's sheet folded four times, producing...[more]
gilt
The decorative application of gold or gold coloring to a portion of a book on the spine, edges of the text block, or an inlay in...[more]