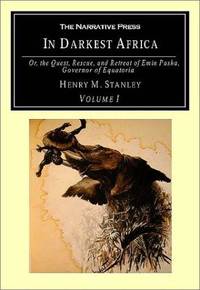 At the turn of the century (the 1890's that is) the interior of the African continent was largely unknown to the American and European public. Accounts of expeditions there meant Danger! Adventure! Intrigue! Readers thrilled by these stories longed to follow in the footsteps of the great explorers and of course one of the greatest was Henry M. Stanley. He had already achieved fame from his quest to find Dr. Livingstone, and in 1888 he led an expedition to come to the aid of Mehmed Emin Pasha. In Darkest Africa is his account of what happened.The Pasha was born Edward Schnitzler in Germany, had assumed the title "Emin Effendi Hakim" (the faithful physician) while employed as a doctor in Khartoum, and had later been appointed the local governor in the southern Sudan. (Confused yet?) He had been forced from Khartoum into retreat to the shores of Lake Albert by a revolt led by the Islamic holy man known as the "Mahdi." Stanley had met Emin on an earlier expedition, and was felt to be the logical choice to lead this new campaign. Volume One of this two-volume set details the political events that lead up to the revolt, and the progress of Stanley from the mouth of the Congo River to Lake Albert (in present day Uganda) a journey of over 1,400 miles. They travelled by steamers (one being the Stanley, of course), and they had their own steel frame "canoe," which could be broken down into sections for portage. Legends about dwarves living in the forests of central Africa had been widely circulated, and Stanley was certain he had met them in the tribe of the Pygmies near Fort Bodo, one of his most exciting encounters. He also provides descriptions of the wide variety of native peoples, villages and terrain through which he travelled. Stanley and his men had to contend with disease, desertions, and lack of food, as well as attacks upon them by hostile natives. In an incident that later led to questions about Stanley's judgment, he left a detachment of men at Yambuya to await the arrival of a promised 600 porters with orders for them to rejoin the main party. They never did, and he is careful to document his version of the affair in this book.Volume Two chronicles Stanley's reaching the Emin Pasha and finally persuading him to abandon Lake Albert in 1889. Again he is zealous in his reporting, including accounts of a personal nature such as his attack of inflammation of the stomach, as well as those of greater interest to the general reader. Again they contend with disasters: at one point they must feed 130 people on a thin butter and milk broth for days on end, at another they fend off a surprise ambush. In all, 1,500 people made the journey that ended in Bagamoyo (present day Tanzania). They travelled through the legendary Ruwenzori range (Uganda), which few Europeans had seen, and which had been the subject of much speculation by everyone from Greco-Roman to medieval Arab scholars.Stanley verified that the Semliki River linked Lake Edward to Lake Albert, which was big news to those interested in the sources of the Nile. It took them sixteen days to cross the Semliki valley region.This is an extremely important book for all those interested in the history of Africa, both for its descriptions of indigenous peoples and terrain and for what it reveals about the imperialist attitudes that shaped the course of events. And not to be entirely irreverent, but if you visit Stanley's grave site in England, you'll notice that his is a giant stone, surrounded, it seems, by pygmy stones. We think that Sir Henry Morton Stanley would find this a fitting tribute to his stature.