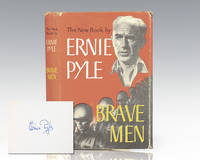 New York: Henry Holt, 1944. First edition of this memoir by America's most beloved war correspondent, written just before his death in World War II. Octavo, original cloth. Signed by Ernie Pyle on the front free endpaper. Very good in a very good dust jacket. Jacket photograph by Milton J. Pike. "Brave Men is a collection of journalist Pyle's newspaper columns from 1943 and 1944, in which he details the fighting in Europe primarily from the perspective of the common U.S. G.I. This angle of reporting brought the front-line war back to the families of those serving in the armed forces and endeared Pyle to the troops. An essential piece of Americana for all collections" (Library Journal). "Ordinary soldiers, in addition to a reading public estimated to number 13 million at the peak of his success, revered Pyle because of his humor, sensitivity, warmth, sense of camaraderie, and eagerness to share their mud-and-blood dangers. His unique style combines detail and terseness, objective evaluation, humor, and poignancy. Many World War II correspondents concentrated on politics, the 'big picture,' and strategies and tactics. Others analyzed postwar implications of wartime decisions. Still others clung to high and mighty persons and sketched their personalities. Among Pyle's near-peers, Ernest Hemingway, Edward R. Murrow, and William L. Shirer may be named. Pyle almost exclusively sought to interpret the ordinary enlisted man's thoughts and behavior" (ANB). On April 19, 1945, just months before the end of the war, "Ernie Pyle died... just west of Okinawa, like so many of the doughboys he had written about. The nationally known war correspondent was killed instantly by Japanese machine-gun fire" (New York Times).

Newspaper columns reveal the journalist's first-hand accounts of trench warfare, field hospitals, destroyed cities, realities of being a soldier, and the frontlines of battle during the fighting in Europe from 1943 to 1944.

The war from the view of the average soldier, captured by a writer on the beaches beside them.

Cloth
"Cloth-bound" generally refers to a hardcover book with cloth covering the outside of the book covers. The cloth is stretched...[more]
jacket
Sometimes used as another term for dust jacket, a protective and often decorative wrapper, usually made of paper which wraps...[more]
First Edition
In book collecting, the first edition is the earliest published form of a book. A book may have more than one first edition in...[more]
G
Good describes the average used and worn book that has all pages or leaves present. Any defects must be noted. (as defined...[more]
octavo
Another of the terms referring to page or book size, octavo refers to a standard printer's sheet folded four times, producing...[more]

Born in the midst of the Great Depression, the theme of the 1939 World's Fair was "The World of Tomorrow" - a theme that captured the hearts of a generation. Check out the maps, souvenirs, and other ephemera on Biblio!