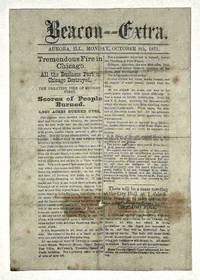 Aurora Beacon, Aurora, Illinois, 1871; 6 1/4" x 9". Aurora, Illinois Beacon Extra for Monday, Oct. 9, 1871, reporting the Great Chicago Fire, which began the night previous. Describes the scene as Beacon reporters rushed to Chicago early dawn only to find the city in ruin with over 5,000 acres already burned, masses of dead in the streets, the frantic exodus of the city’s survivors attempting to reach safety, the devastation in courthouse square, including an eyewitness account of the tumbling of the courthouse wall, and how all city jail prisoners were released but for three murderers who were kept secured. "No tongue can tell the horror of the scene, no pen can depict or imagination portray the misery and desolation caused by this great calamity. As we looked over the now flat and burning prairie, which, yesterday, was Chicago, we felt that no estimate of the great loss of property and life could definitely be made. Suffice it to say Chicago is in ashes." Attributes the source of the fire to a cow which kicked over a lantern while being milked by a woman at the corner of Dekovin (sic) and Jefferson streets. The sheet calls for a mass meeting at Aurora City Hall at 7:00 that evening to take action for the relief of the victims of the fire, stating that a train has set out from Galesburg with boxcars to pick up contributions for relief of the sufferers, appealing to all those who could afford to do so to meet the train at 3:00 a.m. at Aurora station with provisions of cooked food. The Chicago fire ended the following day, after incinerating nearly 3.5 square miles and leaving over 300 dead and a reported 100,000 people homeless. Very Good condition. A few fragile seam folds, repaired on the back with japan paper. Though not marked, this item is from the library of James S. Copley (1916-1973), owner of the powerful Copley News Service and pre-eminent collector of newspaper Americana. He was the son of I.C. Copley (1864-1947), Aurora industrialist who purchased the Beacon in 1905 and subsequently built the Copley newspaper empire. A rare item of both Chicago and American history.

All first editions are also first printings unless otherwise stated. All items guaranteed. Domestic and international shipping rates shown are based on a weight of 2.2 lbs. For heavier items we may contact you to let you know that extra shipping is required. Provided we receive prior notice, books may be returned for any reason within 10 days of receipt for a full refund, including shipping, as long as they are in the same condition as when originally sent.

Seller rating:
This seller has earned a 5 of 5 Stars rating from Biblio customers.
Biblio.co.uk member since: 2015
Van Nuys, California
Ask Seller a Question