Home Lewis, C S The Chronicles Of Narnia
Fantastic creatures, heroic deeds, epic battles in the war between good and evil, and unforgettable adventures come together in this world where magic meets reality, which has been enchanting readers of all ages for over sixty years. The Chronicles of Narnia has transcended the fantasy genre to become a part of the canon of classic literature. - From author’s website.

The Chronicles of Narnia is a series of fantasy novels by British author C. S. Lewis. Written by Lewis, illustrated by Pauline Baynes, and originally published in London between 1950 and 1956.

The Lion, the Witch and the Wardrobe, the first book of the series, was published by Geoffrey Bles in the United Kingdom on 16 October 1950. - States "First Printing" on the copyright page, Bound in light blue cloth with lettering stamped in silver on spine.

Prince Caspian: The Return to Narnia, second book in the series, was published on 15 October 1951- Octavo with original blue cloth, spine lettered in silver, and map front endpapers. Colour frontispiece, black and white illustrations throughout.

The Voyage of the Dawn Treader, third book, was first published on 15 September 1952 - Bound in blue/grey cloth, stamped in navy blue with illustrations by Pauline Bayles.

The Silver Chair, fourth in the series, published on 7 September 1953- Black and white illustrations, original map end papers, dark blue hard back binding with silver-gilt lettering to the spine

The Horse and His Boy, fifth book,  was published on 6 September 1954- Brown buckram with brown lettering on the spine and front board.

The Magician's Nephew, sixth book, published by Bodley Head in London on 2 May 1955 - This book is illustrated throughout with the black & white drawings by Pauline Baynes. Plain endpapers, green cloth binding with silver spine title.

The Last Battle, the last book in the series, was published on the 4th of September 1956- Pale green cloth stamped in black on the front panel and the spine panel. Illustrations and dust jacket art by Pauline Baynes. 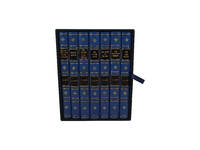 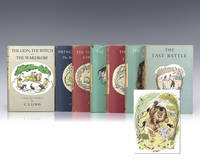 Description:
New York, NY.: Macmillan Publishing Company. Very Good with no dust jacket. 1988. Hardcover in dust jackets. The books in this 7 Volume set are all hard-bound in blue paper covered boards, with a blue cloth spine, with silver stamping on the upper covers and spines, in very nice dust jackets, all held in slip-case with light … Read more
Add to Wishlist
Item Price
£206.43 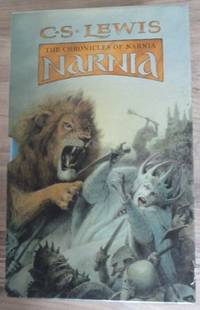 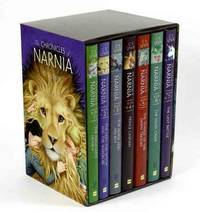 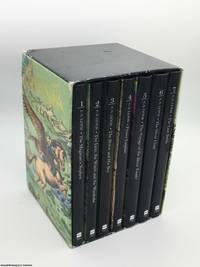 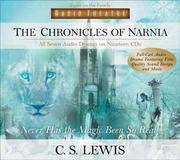 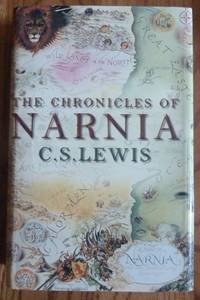 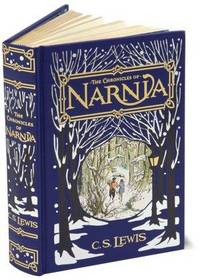 Description:
NY: HarperCollins. Near Fine/Near Fine Slipcase VG (see notes). 1994. reprint. hardcover. 8vo . All books Near fine or better (still crisp), in near fine or better DJs, except v. 4, 1" flap fold tear bottom foreedge. Slipcase has some wear to the back panel and scuffing to the bottom panel. Can't put mylar on these, as they wouldn't… Read more
Add to Wishlist
Item Price
£82.57 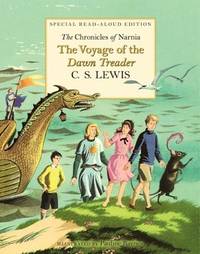 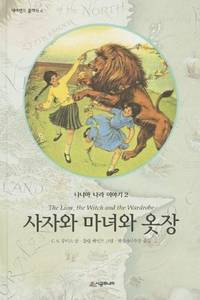 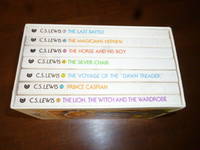 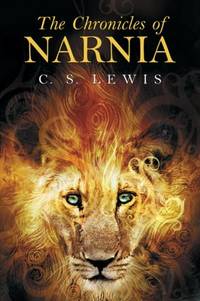 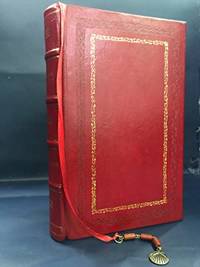 Description:
2010. Full Leather Bound. New. CHOOSE ANY LEATHER COLOR OF YOUR CHOICE WITHOUT ANY EXTRA CHARGES, JUST OPEN ""View Larger Image"" BUTTON JUST BELOW THE BOOK IMAGE AND MAIL US YOUR CHOICE. With the launch of the most exciting Narnia film yet, The Voyage of the Dawn Treader, we publish a beautiful tie-in edition of the entire Chronicles… Read more
Add to Wishlist
Item Price
£61.93 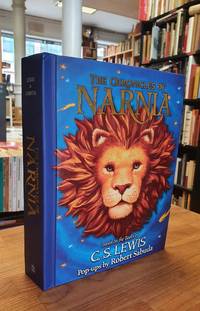 This copy of The Chronicles of Narnia offered for sale by Temple Rare Books for £15,000.00