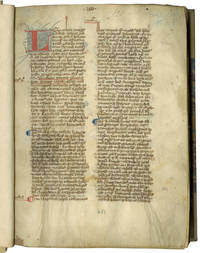 FOURTEENTH-CENTURY MANUSCRIPT OF A RARE NEW TESTAMENT COMMENTARY COPIED BY A NAMED SCRIBE. In Latin, decorated manuscript on parchment, Southwest Flanders or Hainaut (Tournai?), c. 1350. Dimensions 240 x 170 mm., 120 folios, complete, catchwords in red and brown ink, quire signatures, written by a single scribe in a university bookhand, scrolling cadels at top lines sometimes in human and animal forms, numerous red and blue/black penwork initials of five to seven lines. BINDING: Nineteenth-century marbled boards and doublures, parchment covering corners and spine, spine title in red and black with filigreed decoration in red. TEXT: A New Testament commentary, Jacobus Folquerius's Viridarium Gregoriana, mined from many of Gregory the Great's works, drawing occasionally on Alulfus of Tournai's Gregorialis. The text is known in only three other manuscripts; this copy was, until now, apparently unknown, and is certainly the only of its kind on the market. PROVENANCE: Based on the script, this manuscript was copied c. 1350 by a scribe trained in Southwest Flanders or Hainaut (Tournai?). The parchment's texture and penwork initials are also consistent with this region. The scribe, moreover, names himself on the final folio: "Hic liber est scriptus ludofus sit benedictus." Ludolfus is otherwise unknown. The Germanic name Ludolfus, coupled with the manuscript's northwestern physical features, is consistent with production in this region; an auction record indicates this manuscript was previously in a Bordeaux private collection, although the blue pencil note in English suggests an interruption in French ownership. CONDITION: some small spots and parchment discoloration occasionally clouding text, several original holes in parchment once stitched, rodent damage to bottom inner corner of last two quires, minor cockling of leaves due to tight binding, some chipping on binding cover, edges, and hinges, staining on front flyleaves and some ink transfer to flyleaves adjacent to book block, overall in good condition. Full description and images available. (TM 1054)

edges
The collective of the top, fore and bottom edges of the text block of the book, being that part of the edges of the pages of a... [More]
Marbled boards
... [More]
tight
Used to mean that the binding of a book has not been overly loosened by frequent use.
leaves
Very generally, "leaves" refers to the pages of a book, as in the common phrase, "loose-leaf pages." A leaf is a single sheet... [More]
New
A new book is a book previously not circulated to a buyer. Although a new book is typically free of any faults or defects, "new"... [More]
Parchment
Pages or book covering made from a prepared animal skin. Parchment describes any animal skin used for books, while vellum is a... [More]
chipping
A defect in which small pieces are missing from the edges; fraying or small pieces of paper missing the edge of a paperback, or... [More]
spine
The outer portion of a book which covers the actual binding. The spine usually faces outward when a book is placed on a shelf.... [More]