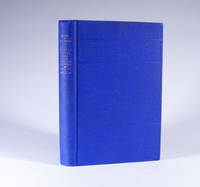 Description:
Washington: Government Printing Office, 1899, First Edition. Tall 8vo. 23.2 cm. (iv) 144pp., 68 black-and-white photographs and engravings, large fold-out color map at rear. Publisher's blue ruled pebbled cloth with gilt title on spine. Scarce. An important association copy gifted by Jarvis to A. P. to M.E. Swineford, Governor of Alaska. Arctic Bibliography 18402; Ricks p. 241; Wickersham 7604.
"Following the direct intervention of President McKinley, The Bear was equipped, and in November 1897 set out to rescue eight whaling ships which had become trapped in the ice near Point Barrow. Despite the difficulties involved in a winter mission to Arctic waters, the "Bear" and her crew managed to reach Seattle ten months later with four of the whaling crews, with no loss to its own complement of men." This book documents the account of the cruise of the "Bear" in 1898 to Cape Vancouver, West Alaska, landing a party under the command of Lt. D. H. Jarvis to go overland to Pt. Barrow to rescue whaling crews… Read more
Item Price
£1,341.54
£55.90 shipping to GBR