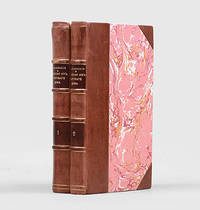 Zapiski iz mertvago doma (Notes from the House of the Dead).

Zapiski iz mertvago doma (Notes from the House of the Dead).

St Petersburg: Iosafat Ogrizko,, 1862. I don't know a better book in all literature" (Tolstoy) - an exceedingly rare presentation copy, inscribed to his friend who saw him off to Siberian exile 2 volumes, octavo (203 x 133 mm). Recent Russian brown half calf to style, raised bands, dark red labels, gold vein marbled paper sides, contrasting marbled endpapers. Housed in a custom leather-entry slipcase. With half-titles. Some staining and browning. First complete edition, very rare presentation copy to Aleksandr Petrovich Miliukov (1817-1897), inscribed by the author in Russian at the head of the first half-title, "Aleksandr Petrovich Miliukov, from the author, in memory, with respect and sincere devotion". A superb association for this novel. Miliukov and Dostoevsky's brother Mikhail were the only two people present to say farewell when Dostoevsky began his journey to Siberian prison and exile on 24 December 1849 (Leonid Grossman, Dostoevskii, Moscow 1965, p. 158). Ten years later, Miliukov was among the party at Nikolaevsky railway station to welcome him back to St Petersburg. In the meantime Dostoevsky had undergone the transformational prison experiences that he documents in this semi-autobiographical novel. In all probability it was Miliukov who reviewed Diadiushkin son (Uncle's Dream), the comic novella that marked Dostoevsky's return to the literary scene after a decade's silence, in the 29 April 1859 issue of the Brussels newspaper, Le Nord. In September 1860 Dostoevsky agreed to serve as the godfather of Miliukov's son. And it was at Miliukov's urging that Dostoevsky engaged the services of the stenographer who was later to become the author's second wife. For Dostoevsky's description of Miliukov's warm personality, see Dostoevsky, Polnoe sobranie, vol. 18 (Leningrad, 1978), p. 168. On publication Miliukov gave Notes from the House of the Dead a highly favourable review, and later described the circumstances surrounding its publication in his memoir, Literaturnye vstrechi i znakomstva (Literary Meetings and Acquaintances; St. Petersburg, 1890): "This work came out under circumstances that were quite favourable; the censorship at that time was animated by a breath of tolerance and in literature works appeared which until recently were still unthinkable in print. Although the novelty of the book, devoted exclusively to the mode of convict life, the sombre canvas of all these stories about terrible evildoers and, lastly, the fact that the author himself was a political criminal who had just returned, somewhat disturbed the censor, yet this, notwithstanding, did not force Dostoevsky to deviate in anything from the truth, and Notes from the House of Death produced a startling impression. In the author they saw a new Dante who had descended into hell, the more horrible in that it existed not in a poet's imagination, but in reality." During the latter part of the 1860s and the beginning of the 1870s, the relationship between the two men cooled. Earlier, in 1859 Miliukov had become the editor of the new "thick journal" (tolstyi zhurnal) Svetoch. In a letter of 28 September that year, Miliukov invited Dostoevsky to write for it. Dostoevsky agreed to collaborate on Svetoch but never published any of his works there. It is interesting to note that former Petrashevets and poet Aleksei Pleshcheev foresaw a problem with Miliukov's ability to give life to a journal. In October 1859, before Svetoch had begun publication, Pleshcheev wrote to Dostoevsky that Miliukov was "good, intelligent, but to what extent he is capable of setting a tone for the journal, of breathing life into it with a lively new word - the question still remains" (Mikhail Alekseev, ed., Literaturnyi arkhiv. Materialy po istorii literaturyi obshchestvennogo dvizheniia, vol. 6, Moscow 1961, p. 261). This is an outstanding association for the first major work of Dostoevky's maturity. The novel marks a sea-change in his fiction. The mock execution he endured, the four years hard labour in prison camp, the years of military service and exile after that, all marked him for life and would lead him onto the themes of his later novels. From The House of the Dead on, all his great works would concern a murder. Tolstoy so admired The House of the Dead that he wrote "I don't know a better book in all literature" and asked a mutual friend, "Please tell him that I love him". This two-volume edition is the first complete edition in book form, following the serial publication by Bazunov in the literary journal Time in 1861 and 1862 and the publication of volume I only by Eduard Prats in 1862. Full inscriptions by Dostoevsky are very rare. The only example in auction records is a selection of parts of Dnevnik Pisatelya for 1877 (A Writer's Diary, 1877), with one wrapper inscribed by the author and a fuller inscription from Dostoevsky to the compositor of the December part pasted onto the front free endpaper, sold at auction in 1983. Kilgour 279 (this edition).

octavo
Another of the terms referring to page or book size, octavo refers to a standard printer's sheet folded four times, producing...[more]
New
A new book is a book previously not circulated to a buyer. Although a new book is typically free of any faults or defects,...[more]
raised band(s)
Raised bands refer to the ridges that protrude slightly from the spine on leather bound books.  The bands are created...[more]
calf
Calf or calf hide is a common form of leather binding.  Calf binding is naturally a light brown but there are ways to treat...[more]
marbled paper
Decorative colored paper that imitates marble with a veined, mottled, or swirling pattern. Commonly used as the end papers or...[more]
inscribed
When a book is described as being inscribed, it indicates that a short note written by the author or a previous owner has...[more]