Home Peter Harrington Where the Wild Things Are. 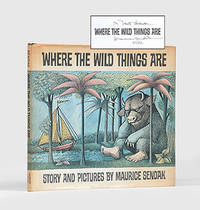 New York: Harper & Row,, 1963. Inscribed by author Oblong quarto. Original cloth-backed pictorial paper boards. With the Sendak-designed dust jacket. Housed in a turquoise quarter morocco solander box by the Chelsea Bindery. Illustrated throughout by Sendak. Light residue from bookplate removal to front pastedown, minute crease at corner of pp. 7/8, book block ever so slightly shaken. A near-fine copy in the jacket, front flap price-clipped at foot as issued, first-issue price of $3.50 at head of flap intact, minor toning, small chips and nicks at extremities, short closed tear at head of front panel and light creasing at head of rear panel, small pencilled notation to rear panel. First edition, first printing, first issue, inscribed by the author on the half-title: "For Janet Anderson, Maurice Sendak 4/15/82". With the ticket for a book signing at Newcomb Hall Bookstore at the University of Virginia loosely inserted, signed by Anderson on the back; Janet Anderson served as a book designer at the University of Virginia Press. There were multiple issues of the book, but this copy is the earliest issue, distinguished by the Library of Congress number 63-21253 to the title page, the codes 40-80 and 1163 to the front flap, and the absence on the rear flap of the mention of the Caldecott Award bestowed upon the book on publication - the winning of such a prestigious prize compelled the publishers to recall the entire edition and change the text on the dust jacket to include the achievement. Where the Wild Things Are was criticized at the time of publication for its darker elements, but was soon acclaimed as a triumph of children's storytelling and book design; it has remained a classic of 20th-century children's literature, and was adapted into a film in 2009. Hanrahan A58; Grolier Club, One Hundred Books Famous in Children's Literature, 97.

Where the Wild Things Are is a 1963 children's picture book by American writer and illustrator Maurice Sendak, originally published by Harper & Row. The book has been adapted into other media several times, including an animated short, a 1980 opera, and, in 2009, a live-action feature film adaptation. According to HarperCollins, the book has sold over 19 million copies worldwide as of 2008.

Read more: Identifying first editions of Where the Wild Things Are.

morocco
Morocco is a style of leather book binding that is usually made with goatskin, as it is durable and easy to dye. (see also...[more]
title page
A page at the front of a book which may contain the title of the book, any subtitles, the authors, contributors, editors, the...[more]
shaken
A hardcover in which the text block is loose, but still attached to the binding.
jacket
Sometimes used as another term for dust jacket, a protective and often decorative wrapper, usually made of paper which wraps...[more]
bookplate
Highly sought after by some collectors, a book plate is an inscribed or decorative device that identifies the owner, or former...[more]
First Edition
In book collecting, the first edition is the earliest published form of a book. A book may have more than one first edition in...[more]
inscribed
When a book is described as being inscribed, it indicates that a short note written by the author or a previous owner has...[more]
quarto
The term quarto is used to describe a page or book size. A printed sheet is made with four pages of text on each side, and the...[more]