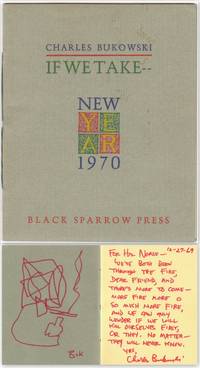 IF WE TAKE: [Inscribed Association]

An extraordinary and warm inscription in the first of many Black Sparrow greetings Bukowski would do for the press. Norse, perennial literary scenester and author of the classic cut-up novel Beat Hotel, was a frequent Bukowski correspondent beginning in the mid 1960's, and it was Norse who recommended Bukowski to Penguin Press for their Modern Poets series (he and Norse appeared together in the thirteenth installment) -- then Bukowski's highest-profile appearance to date. But the two didn't meet in person until January of 1969, a little less than a year before this inscription. Norse recalls the experience in his book MEMOIRS OF A BASTARD ANGEL: "I knew that a wild Falstaffian ruffian had come to shake things up with more fiction than fact, more fantasy than truth [...] Bukowski was misshapen [...] He looked [...] down and out" (p. 420). And indeed, the poet was down and out: frustrated at his job for the Post Office and desperate to find a way to support himself from his writing alone. He would soon find that opportunity later the same year when Black Sparrow publisher John Martin famously offered Bukowski a guaranteed $100 a month for life if he wrote for the press full time. According to Martin, their agreement went into effect January 2nd, 1970 - just six days after this inscription and only a few weeks before Bukowski completed his first novel, Post Office. Norse and Bukowski remained life-long -- if contentious -- friends and correspondents (a collection of their letter has been slated, but delayed, for publication since 2002). Quite simply, one of the closest and warmest Bukowski associations we've seen, capturing the poet at a pivotal moment in his career. [Krumhansl 31]. [Morrow and Cooney 74].

Payment by check or money order (made out to "Brian Cassidy"), VISA, MasterCard, Discover, American Express, Paypal (books@briancassidy.net). All books subject to prior sale. New customers are asked to prepay. Libraries, institutions, and established customers and dealers may be invoiced. Reciprocal trade courtesies extended. Books may be returned for any reason within thirty days of receipt, through prior arrangement, and in original condition. Unless books are not as described, however, postage to be paid by buyer.

Seller rating:
This seller has earned a 3 of 5 Stars rating from Biblio customers.
Biblio.co.uk member since: 2004
Silver Spring, Maryland
Ask Seller a Question

Intrinsically fascinating, important, or unusual books in all fields. Specialties include popular culture; esoterica; modern and contemporary literature; John Steinbeck; The Beats; poetry; the avant-garde; small journals and magazines (especially those associated with the Mimeo Revolution); manuscripts, literary ephemera; Americana; as well as vernacular, folk, and outsider books of all kinds. I am always looking to purchase books within my areas of interest, from single titles to collections. Please inquire.

First Edition
In book collecting, the first edition is the earliest published form of a book. A book may have more than one first edition in...[more]
rubbing
Abrasion or wear to the surface. Usually used in reference to a book's boards or dust-jacket.
12mo
A duodecimo is a book approximately 7 by 4.5 inches in size, or similar in size to a contemporary mass market paperback....[more]
inscribed
When a book is described as being inscribed, it indicates that a short note written by the author or a previous owner has...[more]
fine
A book in fine condition exhibits no flaws. A fine condition book closely approaches As New condition, but may lack the...[more]