home Raptis Rare Books The Three Musketeers; or, the Feats and Fortunes of a Gascon Adventurer. 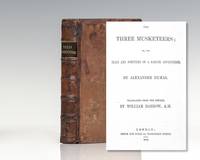 The Three Musketeers; or, the Feats and Fortunes of a Gascon Adventurer.

The Three Musketeers; or, the Feats and Fortunes of a Gascon Adventurer.

First edition in English of Dumas' masterpiece. Octavo, bound in full contemporary calf, gilt titles to the spine, raised gilt bands, marbled endpapers. Translated from the French by William Barrow. Barrow's translation was the first of three English translations published in 1846 and is considered the most faithful to the original text. To conform to nineteenth century English standards other translations removed many of the explicit and implicit references to sexuality which adversely affected the readability of many scenes. Period bookplate to the front pastedown, in very good condition with some loss to a few pages. Housed in a custom half leather clamshell box. First editions are of the utmost scarcity.

Set in the mid 17th century, Alexandre Dumas' masterpiece, The Three Musketeers, chronicles the adventures of the young, foolhardy, and brave d'Artagnan as he leaves his family in Gascony to join the Musketeers of the Guard in Paris. A military branch of the Royal Household of the French monarchy, the King's Musketeers furnished a company of light cavalry and formed the royal guard for the king while he was outside of the royal residences. As the story goes: once in Paris, d'Artagnan is appointed by King Louis XIII to Des Essart's company of the King's Guard and befriends three Musketeers: Athos, Porthos, and Aramis. He soon becomes involved in a plot of seduction, murder and revenge that ultimately results in his promotion to the Musketeers, although he is left heartbroken and filled with regret. First serialized from March to July of 1844 (four years before the beginning of the French Revolution), Dumas used the protagonist's adventures as a vehicle to explore the injustices that defined the current social and political climate. The novel was adapted into numerous television series and films including the 1993 Austrian-American action-adventure comedy starring Charlie Sheen, Kiefer Sutherland, and Tim Curry.

The Three Musketeers is a novel written by Alexandre Dumas. It recounts the adventures of a young man named d'Artagnan after he leaves home to become a guard of the musketeers. D'Artagnan is not one of the musketeers of the title, which refers to Athos, Porthos, and Aramis, three inseparable friends who live by the motto: "All for one, one for all" ("Tous pour un, un pour tous"). The story of d'Artagnan is continued in Dumas' Twenty Years After and The Vicomte de Bragelonne. The three novels are together known as the d'Artagnan Romances.

Read more: Identifying first editions of The Three Musketeers; or, the Feats and Fortunes of a Gascon Adventurer.

calf
Calf or calf hide is a common form of leather binding. Calf binding is naturally a light brown but there are ways to treat the... [more]
octavo
Another of the terms referring to page or book size, octavo refers to a standard printer's sheet folded four times, producing... [more]
leaves
Very generally, "leaves" refers to the pages of a book, as in the common phrase, "loose-leaf pages." A leaf is a single sheet... [more]
spine
The outer portion of a book which covers the actual binding. The spine usually faces outward when a book is placed on a shelf.... [more]
bookplate
Highly sought after by some collectors, a book plate is an inscribed or decorative device that identifies the owner, or former... [more]
clamshell box
A protective box designed for storing and preserving a bound book or loose sheets. A clamshell box is hinged on one side, with... [more]
gilt
The decorative application of gold or gold coloring to a portion of a book on the spine, edges of the text block, or an inlay in... [more]

This gallery is dedicated to some of the best fiction and nonfiction portraying one of the greatest cities in the world. We Heart NYC! Enjoy browsing these books on New York City.