Join us June 2–June 4, 2022 for our second virtual antiquarian book fair!
Preregister now for Biblio.live and get $10 to use at the fair.
home Evening Star Books A Sailor's Life Under Four Sovereigns 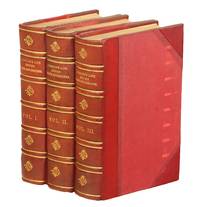 A Sailor's Life Under Four Sovereigns

A Sailor's Life Under Four Sovereigns

London: Macmillan & Co. Limited, 1899. First edition. Hardcover. Very Good. 3 vol. 8vo. [9], x-xiv, [1], 2-340, [2]; [7], viii-xii, [1], 2-339, [3]; [7], viii-xi, [4], 2-350, [2] pp. Contemporary half red morocco over red cloth, spine in six compartments, each bordered by gilt rules with lettering and decorations stamped in gold; all edges gilt. Red and gold marbled endpapers and pastedowns, red silk bookmark bound in each volume. Each volume illustrated with a frontispiece; decorations include numerous in-text illustrations and several full-page illustrations; two full-page maps and a double-plate map in volume 1, double-plate map and four full-page maps in volume 2, two full-page maps and a double-plate map in volume 3. A brief signed note (single sheet, 11.5 cm by 18 cm) from Keppel to a friend (stating in part "the Hague is an extensive place to address so I shall send this to St. Stephens Club") is laid in to volume 1 (note: this is an actual holograph, not the facsimile dedication bound in to volume 1 which is frequently misrepresented as such). Howgego 1800-1850, K8; ODNB, L. G. C. Laughton 'Keppel, Sir Henry'. Henry Keppel was an English naval officer for most of the nineteenth century. He undertook extensive voyages to the East and West Indies. After meeting James Brooke in 1842, in Singapore, the two campaigned against piracy in the region. From 1844 to 1847 Keppel was retired until he returned to Borneo in the Maeander to assist Brooke at combatting piracy. Keppel served in the Crimean War, and fought in the Second Opium War in 1857. He became admiral of the fleet in 1877 and he was appointed as the first and principal naval aide-de-camp to Queen Victoria in 1878. An attractive set of Keppel's account of his life and service in the Royal Navy. A Very Good or better set with some mild rubbing to the boards (more significant on the front of volume 3), two ownership markings to all volumes, a touch of loss to the paper on the front gutter of volume one, leaves show scattered foxing and an occasional tiny dampstain.

All items subject to prior sale.� Certain items and shipping to certain countries may exceed the standard shipping amounts.� Any shipping expenses incurred above the standard rate will be billed at cost. Payment is in US dollars.� Personal checks must clear prior to shipment (please allow 10 days).� Books may be returned within 15 calendar days of delivery for any reason, so long as we are notified of return within 10 days of delivery.� Return items must be well packaged and fully insured and must be returned in same condition as sold. Any book described as a First Edition is also a First Printing unless otherwise indicated.

Seller rating:
This seller has earned a 5 of 5 Stars rating from Biblio customers.
Biblio.co.uk member since 2007
Madison, Wisconsin
Ask Seller a Question

We buy and sell rare and fine books in many fields. Our interests include philosophy, modern first editions, and works of historical or intellectual interest. In addition to bookselling, we regularly do valuations and appraisals for non-IRS purposes. Evening Star Books is a Limited Liability Company.

First Edition
In book collecting, the first edition is the earliest published form of a book. A book may have more than one first edition in... [more]
spine
The outer portion of a book which covers the actual binding. The spine usually faces outward when a book is placed on a shelf.... [more]
gutter
The inside margin of a book, connecting the pages to the joints near the binding.
gilt
The decorative application of gold or gold coloring to a portion of a book on the spine, edges of the text block, or an inlay in... [more]
Cloth
"Cloth-bound" generally refers to a hardcover book with cloth covering the outside of the book covers. The cloth is stretched... [more]
edges
The collective of the top, fore and bottom edges of the text block of the book, being that part of the edges of the pages of a... [more]
leaves
Very generally, "leaves" refers to the pages of a book, as in the common phrase, "loose-leaf pages." A leaf is a single sheet... [more]
morocco
Morocco is a style of leather book binding that is usually made with goatskin, as it is durable and easy to dye. (see also... [more]
rubbing
Abrasion or wear to the surface. Usually used in reference to a book's boards or dust-jacket.
facsimile
An exact copy of an original work. In books, it refers to a copy or reproduction, as accurate as possible, of an original... [more]
G
Good describes the average used and worn book that has all pages or leaves present. Any defects must be noted. (as defined by AB... [more]