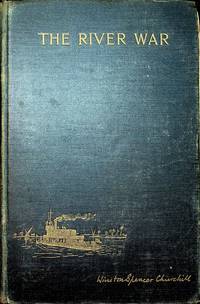 The River War: An Historical Account of the Reconquest of the Soudan

This is one of the rarest of all Churchill first editions, in that only 2,000 copies were printed.

The River War: An Historical Account of the Reconquest of the Soudan (1899), by Winston Churchill, concerning his experiences as a British Army officer, during the Mahdist War (1881–99) in the Sudan.

The River War is a history of the British imperial involvement in the Sudan, and the Mahdist War between the British forces, led by Lord Kitchener, and the Dervish forces, led by Khalifa Abdallahi ibn Muhammad, heir to the self-proclaimed Mahdi Muhammad Ahmad who had embarked on a campaign to conquer Egypt, to drive out the Ottomans.

The River War was Churchill's second published book after The Story of the Malakand Field Force, and originally filled two volumes with over 1000 pages in 1899. The River War was subsequently abridged to one volume in 1902.

The unabridged version of 1899 contains many illustrations with drawings, photogravures, and colored maps. It also contains vivid narratives of personal adventures of the author, his views on British expansionism, passages of deep reflection about the requirements of a civilized government, criticism of military and political leaders and religion.[3] The first edition was reviewed by The Times, which described it as containing material sufficient for two good books and one bad one, with the bad one being the more interesting.

The River War: An Historical Account of the Reconquest of the Soudan is an 1899 book written by Winston Churchill while he was still an officer in the British army.

15 day return guarantee, with full refund including original shipping costs for up to 15 days after delivery if an item arrives mis-described or damaged.

Seller rating:
This seller has earned a 5 of 5 Stars rating from Biblio customers.
Biblio.co.uk member since 2015
Saint Charles, Illinois
Ask Seller a Question

cracked
In reference to a hinge or a book's binding, means that the glue which holds the opposing leaves has allowed them to separate,... [more]
spine
The outer portion of a book which covers the actual binding. The spine usually faces outward when a book is placed on a shelf.... [more]
Publisher's cloth
A hardcover book comprised of cloth over hard pasteboard boards. ... [more]
First Edition
In book collecting, the first edition is the earliest published form of a book. A book may have more than one first edition in... [more]