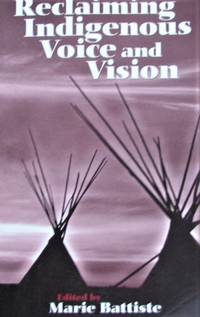 Canada: UBC Press, 2000 « This book seeks to clarify postcolonial Indigenous thought beginning at the new millennium. It represents the voices of the first generation of global Indigenous scholars and converges those voices, their analyses, and their dreams of a decolonized world. -- Marie Battiste, Author.The essays in Reclaiming Indigenous Voice and Vision spring from an International Summer Institute held in 1996 on the cultural restoration of oppressed Indigenous peoples. The contributors, primarily Indigenous, unravel the processes of colonization that enfolded modern society and resulted in the oppression of Indigenous peoples.The authors -- among them Gregory Cajete, Erica-Irene Daes, Bonnie Duran and Eduardo Duran, James Youngblood Henderson, Linda Hogan, Leroy Little Bear, Ted Moses, Linda Tuhiwai Te Rina Smith, Graham Hingangaroa Smith, and Robert Yazzie -- draw on a range of disciplines, professions, and experiences. Addressing four urgent and necessary issues -- mapping colonialism, diagnosing colonialism, healing colonized Indigenous peoples, and imagining postcolonial visions -- they provide new frameworks for understanding how and why colonization has been so pervasive and tenacious among Indigenous peoples. They also envision what they would desire in a truly postcolonial context.In moving and inspiring ways, Reclaiming Indigenous Voice and Vision elaborates a new inclusive vision of a global and national order and articulates new approaches for protecting, healing, and restoring long-oppressed peoples, and for respecting their cultures and languages.» Crease on lower right corner.

CONDITIONS OF SALE: We use basic Canada Post services and rates. Transport costs are taxable. Everything is calculated according to the postal code, the weight of the order and the type of delivery chosen. Transport costs can be modified if a valid reason justifies it.. ----Checks and money orders accepted in Canadian Dollars only. Do not hesitate to contact us directly for precise shipping quote.

Seller rating:
This seller has earned a 5 of 5 Stars rating from Biblio customers.
Biblio.co.uk member since 2016
Quebec, Quebec
Ask Seller a Question