Join us June 2–June 4, 2022 for our second virtual antiquarian book fair!
Preregister now for Biblio.live and get $10 to use at the fair.
home R & A Petrilla POLITICAL PAMPHLETS [spine title]: BOUND VOLUME OF TWENTY-EIGHT (28) PAMPHLETS RELATING TO THE PRESIDENTIAL… 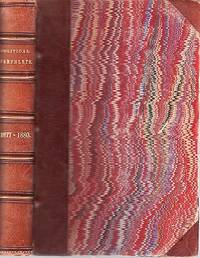 Orders are packed and shipped from our business offices in the village of Roosevelt, New Jersey, USA . Packages are dispatched as quickly and economically as we can manage, via the shipping method that you select

All items are guaranteed to be as described. Any item may be returned within ten (10) days of receipt if found to be other than as described. Please give us advance notice of any return. A returned item must reach us in the same condition as when we shipped it. Original binding, text block, bookplates and any inserted material must be intact.

Seller rating:
This seller has earned a 5 of 5 Stars rating from Biblio customers.
Biblio.co.uk member since 2004
Roosevelt, New Jersey
Ask Seller a Question

About R & A Petrilla

Established 1970, we are generalist antiquarian booksellers. We specialize in old and unusual books, manuscripts, and ephemera. We no longer sell at book fairs. Please see the catalogs on our website, or browse our stock for your interests. We are grateful for your orders. Thank you. -- Bob & Alison Petrilla Professional affiliations: American Antiquarian Society, ABAA, ILAB, IOBA, Library Company of Philadelphia, Philobiblon Club.

G
Good describes the average used and worn book that has all pages or leaves present. Any defects must be noted. (as defined by AB... [more]
wrappers
The paper covering on the outside of a paperback. Also see the entry for pictorial wraps, color illustrated coverings for... [more]
Fair
is a worn book that has complete text pages (including those with maps or plates) but may lack endpapers, half-title, etc.... [more]
New
A new book is a book previously not circulated to a buyer. Although a new book is typically free of any faults or defects, "new"... [more]
gilt
The decorative application of gold or gold coloring to a portion of a book on the spine, edges of the text block, or an inlay in... [more]
spine
The outer portion of a book which covers the actual binding. The spine usually faces outward when a book is placed on a shelf.... [more]
calf
Calf or calf hide is a common form of leather binding. Calf binding is naturally a light brown but there are ways to treat the... [more]