Home Peter Harrington Observations upon some part of Sr Francis Bacon's Naturall History as it concernes, Fruit-trees, Fruits, and Flowers: 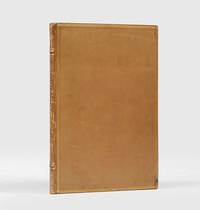 Observations upon some part of Sr Francis Bacon's Naturall History as it concernes, Fruit-trees, Fruits, and Flowers:

Observations upon some part of Sr Francis Bacon's Naturall History as it concernes, Fruit-trees, Fruits, and Flowers: especially the fifth, sixth, and seaventh [sic] centuries, improving the experiments mentioned, to the best advantage.

Oxford: Printed by Hen: Hall for Thomas Robinson,, 1658. Challenging Francis Bacon's theory of the descent of sap Small quarto (198 x 150 mm), pp. 46. Early 20th-century tan calf by Riviere and Son, spine lettered in gilt, gilt roll tool turn-ins, marbled endpapers, top edge gilt, others uncut. Woodcut head-pieces and initials. A number of neat contemporary marginal markings (in the form of a trefoil). Light rubbing to calf, patch of abrasion to front endpaper, a few instances of light soiling to contents, small hole through A4 (touching a few letters), paper flaw at foot of final leaf (clear of letterpress). A very good, well-margined copy, complete with the single leaf "Table" at the end. First edition. Ralph Austen (c. 1612-1676) is a fascinating figure, a combination of self-taught gardener and religious radical, whose "approach to horticulture was innovative, experimental, and sceptical of the authority of theorists" (ODNB). Here he challenges Sir Francis Bacon over his theory of the descent of sap, opposing the findings of his friend Robert Boyle, the book's dedicatee. Madan comments that the "treatise is practical as well as critical, and affords advice of various kinds". Provenance: from the Lawes Agricultural Library, with their neat stamp to rear endpaper and small pencilled shelf mark to title page. The library was assembled in the early 20th century by Sir John Russell, director of the Rothamsted agricultural research institution in Hertfordshire, and ranked as one of the finest English collections of agricultural material. ESTC R13917; Madan, III, 2374; Henrey, 3; Fussell, p. 49.

calf
Calf or calf hide is a common form of leather binding.  Calf binding is naturally a light brown but there are ways to treat...[more]
gilt
The decorative application of gold or gold coloring to a portion of a book on the spine, edges of the text block, or an inlay in...[more]
rubbing
Abrasion or wear to the surface. Usually used in reference to a book's boards or dust-jacket.
First Edition
In book collecting, the first edition is the earliest published form of a book. A book may have more than one first edition in...[more]
title page
A page at the front of a book which may contain the title of the book, any subtitles, the authors, contributors, editors, the...[more]
spine
The outer portion of a book which covers the actual binding. The spine usually faces outward when a book is placed on a shelf....[more]
top edge gilt
Top edge gilt refers to the practice of applying gold or a gold-like finish to the top of the text block (the edges the...[more]
quarto
The term quarto is used to describe a page or book size. A printed sheet is made with four pages of text on each side, and the...[more]