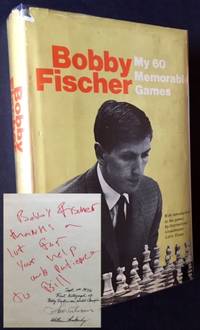 New York: Simon and Schuster, 1969. Hardcover. Near Fine/Very Good +. ****AN EXTRAORDINARY PIECE OF CHESS HISTORY**** AND ONE OF THE TOWERING ASSOCIATION COPIES IN THE GAME'S VAST LITERATURE. WARMLY inscribed (in itself very unusual) by the newly-minted World Champion to William Lombardy, Bobby Fischer's "second" at Reyjavik and the man widely credited with convincing an overwrought Fischer to move forward and play the match. As with most of Fischer's relationships, his friendship with Lombardy was complicated and experienced many highs and lows. But the fact remains that Lombardy played a major role as coach and mentor in Fischer's development as a world-class player and provided much-needed stability during Bobby's early years. Fully aware of Fischer's tight-fisted ways, Lombardy was understandably looking for compensation for the time and toil he had invested in the Fischer-Spassky match and he set his sights on this historic copy of "My 60 Memorable Games". By making sure that he could secure Bobby's very first signature as World Champion --and in an expressive, personalized inscription no less-- he understood that he would own a piece of chess immortality, a physcial talisman for the ages. To further mark the significance of the signing, Lombardy verified in his own hand that this indeed was Fischer's first signature as World Champion and he even had Saemi Palsson (Fischer's bodyguard and the Chief of the Reyjavik Police Department) sign this copy as well as a witness to history. On top of the remarkable history attached to it, this copy is also a very solid example of the 1969 stated 1st printing. Clean and Near Fine in a crisp, price-intact ($6.95), VG+ dustjacket, with just a bit of light chipping along the panel edges. Thick octavo, "with introductions to the games by International Grandmaster Larry Evans". ONE OF THE GREAT FISCHER PIECES EVER TO REACH THE MARKET AND ONE OF THE TRUE RARITIES TO EMERGE --ALMOST 50 YEARS LATER-- FROM THE EPIC 1972 STRUGGLE IN REYJAVIK.

One of the most important chess books ever written, reissued in celebration of a chess genius, Bobby Fischer. The American takes the reader through 60 of his games, describing his thoughts, the intricacies behind his and his opponent's strategies, the tactical justification of moves and the psychological battle in each one. You ll find beautifully simple positional play next to out-of-this-world combinations that are just breathtaking. Fischer played nearly all of these games as a grandmaster so they are at the very highest level, but his lucid commentary makes every move and idea both accessible and understandable. Every player will learn huge amounts from this book. It is essential for each chess enthusiast, competitor and professional. The controversial alterations that were made to Bobby Fischer's words in the last edition have been omitted in this book, so only the author's own words are expressed, giving a true insight into one of the most gifted, troubled and controversial minds of the 20th century. Includes index.

Seller rating:
This seller has earned a 5 of 5 Stars rating from Biblio customers.
Biblio.co.uk member since:
Waccabuc, New York
Ask Seller a Question

crisp
A term often used to indicate a book's new-like condition. Indicates that the hinges are not loosened. A book described as crisp...[more]
fine
A book in fine condition exhibits no flaws. A fine condition book closely approaches As New condition, but may lack the...[more]
inscribed
When a book is described as being inscribed, it indicates that a short note written by the author or a previous owner has...[more]
edges
The collective of the top, fore and bottom edges of the text block of the book, being that part of the edges of the pages of a...[more]
octavo
Another of the terms referring to page or book size, octavo refers to a standard printer's sheet folded four times, producing...[more]
chipping
A defect in which small pieces are missing from the edges; fraying or small pieces of paper missing the edge of a paperback, or...[more]

Born in the midst of the Great Depression, the theme of the 1939 World's Fair was "The World of Tomorrow" - a theme that captured the hearts of a generation. Check out the maps, souvenirs, and other ephemera on Biblio!