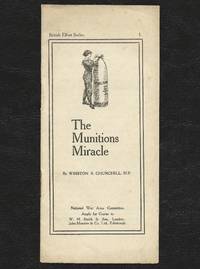 London: National War Aims Committee, 1918. First edition, only printing. Pamphlet. Near fine. This exceptionally rare speech pamphlet contains the speech of 25 April 1918 Churchill delivered in the House of Commons as Minister of Munitions during the First World War. This is the only copy we know of in private ownership. Churchill began the First World War as the powerful First Lord of the Admiralty, but was scapegoated for the Dardanelles disaster and forced out in May 1915. By November 1915, Churchill was serving at the Front, spending part of his political exile as a lieutenant colonel leading a battalion in the trenches. His May 1916 return to London saw "no upsurge in his political fortunes" and left him criticizing the war effort from an unaccustomed "position of political weakness and personal isolation" much as he would two decades later on the eve of the Second World War. (Gilbert, Vol. III) By May 1917 there was growing parliamentary opposition to the Government. "Lloyd George knew that Churchill's aim was to return to a position of authority, but that if no place were found for him, he would continue to attack the Government's war policy." (Gilbert, Vol. IV, p.15) Whether for Churchill's talents, desire to silence him, or both, Lloyd George began to consult and consider Churchill. Newspaper editorials inveighed against Churchill and several Ministers vigorously objected. Nonetheless, on 16 July 1917 Churchill accepted the post of Minister of Munitions. True to form, he proved "eager to involve himself in as wide a range of discussions as possible" (Gilbert, Vol. IV, p.32) and implemented major reorganization of his Ministry. By April 1918, Churchill commanded an optimized Ministry and was asserting exactly the sort of influence his detractors resented. Returning from a tour of the French Front to the onset of a major German offensive, on 18 April Churchill sent his Prime Minister a lengthy memorandum analyzing the strategic decisions which would have to be taken if the offensive continued. (Gilbert, Vol. IV, p.106) A week later, on 25 April, Churchill spoke for an hour and a half in the House of Commons about the military crisis and munitions production, offering what he called 'a fairly good report' detailing the Ministry's ability to replace and often exceed losses of guns, aircraft, and tanks. Churchill specifically praised the nearly three quarters of a million women employed under his Ministry at the time. "It is a striking fact that more than nine-tenths... of the whole manufacture of the shells... of the British Artillery, are due to the labours of women..." Concluding, perhaps Churchill spoke for himself as much as for his Ministry: "instead of quarrelling, giving way as we do from time to time to moods of pessimism and irritation, we ought to be thankful that if such trials and dangers were destined for our country we are here to share them, and to see them slowly and surely overcome." Despite persistent detractors, Churchill would prevail in his difficult return to power, assuming control of the War Office as Secretary of State for War and Air by January 1919. This pamphlet publication of Churchill's 25 April 1918 House of Commons speech was issued by the National War Aims Committee, apparently as No. 1 in their "British Effort Series". Like Churchill, it is a remarkable survivor. Ronald Cohen notes only institutional copies in his Bibliography. The pamphlet is printed on off-white pulp stock, measures 6.5 x 3 inches, is bound in wire-stitched self-wrappers, and is 16 pages. Pages 2-15 bear Churchill's speech. Recognizing the women Churchill praised, the front cover illustration is a woman beside an enormous artillery shell. Condition is near-fine, complete with no loss or tears and virtually no wear. Both binding staples remain firmly attached, showing only modest rust. The covers are slightly age-toned and lightly soiled at the extremities. The contents remain clean and bright. We note no previous ownership marks. Bibliographic reference: Cohen A51, Woods A26.

Seller rating:
This seller has earned a 5 of 5 Stars rating from Biblio customers.
Biblio.co.uk member since 2010
San Diego, California
Ask Seller a Question

We buy and sell books by and about Sir Winston Churchill. If you seek a Churchill edition you do not find in our current online inventory, please contact us; we might be able to find it for you. We are always happy to help fellow collectors answer questions about the many editions of Churchill's many works.

fine
A book in fine condition exhibits no flaws. A fine condition book closely approaches As New condition, but may lack the... [more]
soiled
Generally refers to minor discoloration or staining.
First Edition
In book collecting, the first edition is the earliest published form of a book. A book may have more than one first edition in... [more]