Home William Reese Company - Literature ABAA-ILAB THE HOLY BIBLE, CONTAINING THE OLD TESTAMENT AND THE NEW: TRANSLATED OUT OF THE ORIGINAL TONGUES, AND WITH THE… 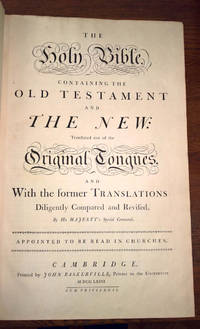 THE HOLY BIBLE, CONTAINING THE OLD TESTAMENT AND THE NEW: TRANSLATED OUT OF THE ORIGINAL TONGUES, AND WITH THE FORMER TRANSLATIONS DILIGENTLY COMPARED AND REVISED...

THE HOLY BIBLE, CONTAINING THE OLD TESTAMENT AND THE NEW: TRANSLATED OUT OF THE ORIGINAL TONGUES, AND WITH THE FORMER TRANSLATIONS DILIGENTLY COMPARED AND REVISED...

Cambridge: Printed by John Baskerville, Printer to the University, 1763. [573] leaves. Royal folio. Full contemporary blue-black morocco (faded to emerald), spine gilt extra, narrow gilt borders on boards, marbled endsheets, a.e.g. Fore-corners bumped, joints a bit worn (but not cracked), lower fore- corners of several leaves exhibit an old ink stain (with old mends to two corners), but otherwise an attractive copy. The Baskerville Bible, one of the highpoints of the imprint, and indeed, of all English Bible-making, was printed in an edition of 1250 copies, priced at four guineas. This copy of what Dibdin declared "one of the most beautifully printed books in the world," has the subscribers list in the third state, concluding with the entry for Charles York. Such an ambitious undertaking stretched Baskerville's finances to their limits, and of necessity, in 1768, he remaindered 556 copies to the London bookseller, R. Baldwin, at 36s each. As late as 1771, Baldwin was advertising copies in sheets in the BIRMINGHAM GAZETTE, priced at 3 guineas. "The design is traditional, but the quality of material and workmanship is so high, and the conventions are so delicately modified and consistently applied that the result is extremely impressive" - CAMBRIDGE HISTORY OF THE BIBLE (p.464). This is a very interesting association copy, having been the family Bible in the 18th and 19th centuries of the S.L. Galton family and descendants, with extensive records in manuscript on two preliminary blanks, recording such events as the marriage of Frances Ann Violetta Darwin (daughter of Erasmus Darwin and aunt of Charles Darwin) to Samuel Tertius Galton, and the birth, in 1822, of Francis Galton -- the originator of the 'school' of Eugenics, explorer, meteorologist, psychologist, and a central figure in the development of the use of fingerprints as a means of identification. There are two bookplates of the Galton family on the front pastedown, and another. GASKELL 26. DARLOW & MOULE 857. RUMBALL & PETRIE 145.

gilt
The decorative application of gold or gold coloring to a portion of a book on the spine, edges of the text block, or an inlay in...[more]
folio
A folio usually indicates a large book size of 15" in height or larger when used in the context of a book description....[more]
Association copy
An association copy is a copy of a book which has been signed and inscribed by the author for a personal friend,...[more]
A.N.
The book is pristine and free of any defects, in the same condition as ...[more]
morocco
Morocco is a style of leather book binding that is usually made with goatskin, as it is durable and easy to dye. (see also...[more]
leaves
Very generally, "leaves" refers to the pages of a book, as in the common phrase, "loose-leaf pages." A leaf is a single sheet...[more]
spine
The outer portion of a book which covers the actual binding. The spine usually faces outward when a book is placed on a shelf....[more]