home Attic Books The History of the World, In Five Books 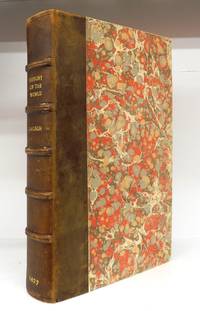 The History of the World, In Five Books

The History of the World, In Five Books

London: Robert White et al, 1677. Hardcover. Very good. [44], 54 [48], 885 [854], [46] p. 38 cm. Frontisportrait and decorations. Black and red title. 8 two-page maps and plan. 2 charts within text. Rebound in quarter leather with marbled paper boards. Text in two columns. Corners bumped. Hinges beginning to crack internally. Repair to frontisportrait. Scattered dampstains and spots. Small tears in pages numbered pp. 179, 329, 811. Repaired bottom corner p. 203. Contents: The First, Intreating of the Beginning and first Ages of the same, from the Creation until Abraham. The Second, Of the Times from the Birth of Abraham to the destruction of the Temple of Solomon. The Third, From the destruction of Jerusalem to the time of Philip of Macedon. The Fourth, From the Reign of Philip of Macedon, to the establishing of that Kingdom in the Race of Antiogonus. The Fifth, From the settled Rule of Alexander's Successours in the East, until the Romans (prevailing over all) made Conquest of Asia and Macedon. By Sir Walter Ralegh, Knight. Whereunto is added in this Edition, the Life and Tryal of the Author.

This work was written by Sir Walter Raleigh, famous English explorer, during his imprisonment in the Tower of London from 1603 to 1616. Raleigh, who had established the lost colony of Roanoke in present-day North Carolina and headed several expeditions to South America, was arrested upon the death of Queen Elizabeth I and imprisoned by King James I, with whom he was highly unpopular. Having nothing better to do while imprisoned, he began this History of the World, intended to outline historical events from creation to modern times, drawing on the Bible, Greek mythology, and other sources. Raleigh dedicated his work to the king's son, Prince Henry, who was trying to secure his release from prison. As Prince Henry put it: "Only my father would keep such a bird in such a cage." The prince's death at the age of 18 in 1612 discouraged Sir Walter, so that his history ends abruptly with the second Macedonian War instead of continuing through two more volumes as originally intended. Given the precarious political situation and restrictions on writing about contemporary history, many writers at the time used ancient history as a way to covertly discuss issues occurring in their own day. Although ostensibly a recounting of historical facts, Raleigh's work also included commentary that was construed by King James to be critical of his court. Several months after publication, King James ordered further sales of the book suppressed and all unsold copies to be confiscated "for being too saucy in censuring Princes." Raleigh was released from the Tower in 1616 to lead one final expedition to South America, but he attacked a Spanish outpost in violation of a peace treaty, and King James found reason to have him beheaded in 1618. This 1677 edition of The History of the World includes "The Life of Sir Walter Raleigh," "The Arraignment of Sir Walter Raleigh," and an engraved frontisportrait. At rear are "To the Reader," "A Chronological Table" and "The Alphabetical Table to the Principal Contents." The book is illustrated with folding maps and battle plans.

Seller rating:
This seller has earned a 5 of 5 Stars rating from Biblio customers.
Biblio.co.uk member since 2011
London, Ontario
Ask Seller a Question

Attic Books is one of the premier retail locations for antiquarian and collectable books in Canada. We recently celebrated our thirtieth year in business. Please browse our select online stock on a wide range of subjects in books and paper collectables for the reader, scholar and the seasoned collector. Or come visit us in London, Ontario to enjoy the relaxed atmosphere of our three floor bookstore, enhanced by original tin ceilings, hardwood maple floors, and the arts & crafts faade of our century building.

marbled paper
Decorative colored paper that imitates marble with a veined, mottled, or swirling pattern. Commonly used as the end papers or... [more]
rebound
A book in which the pages have been bound into a covering replacing the original covering issued by the publisher.