Rare books Antique & Collectible Books More Rare Books from Roger Middleton GAMES ANCIENT AND ORIENTAL AND HOW TO PLAY THEM. Being the Games of the Ancient Egyptians, the Hiera Gramme of… 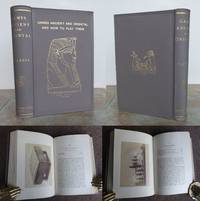 GAMES ANCIENT AND ORIENTAL AND HOW TO PLAY THEM. Being the Games of the Ancient Egyptians, the Hiera Gramme of the Greeks, the Ludus Latrunculorum of the Romans, and the Oriental Games of Chess, Draughts, Backgammon, and Magic Squares.

GAMES ANCIENT AND ORIENTAL AND HOW TO PLAY THEM. Being the Games of the Ancient Egyptians, the Hiera Gramme of the Greeks, the Ludus Latrunculorum of the Romans, and the Oriental Games of Chess, Draughts, Backgammon, and Magic Squares.

We have been established booksellers for 42 years. We are a postal business only (strictly no callers). We are long-standing members of the P.B.F.A. the largest trade association for antiquarian booksellers in the UK. We wrap all our parcels in new materials and all our books are insured at our expense. Books may be returned if wrongly described, all costs will be met by us. ****PLEASE NOTE: POSTAGE WILL BE CHARGED AT COST, MEANING THAT POSTAGE WILL BE REDUCED ON PARCELS WEIGHING UNDER 1 KILO, AND IT WILL BE INCREASED ON MOST PARCELS WEIGHING MORE THAN 1 KILO****

Seller rating:
This seller has earned a 5 of 5 Stars rating from Biblio customers.
Biblio.co.uk member since: 2010
Oxford, Oxfordshire
Ask Seller a Question

We are a postal business only, selling rare and antiquarian books on interesting subjects.

tight
Used to mean that the binding of a book has not been overly loosened by frequent use.
Cloth
"Cloth-bound" generally refers to a hardcover book with cloth covering the outside of the book covers. The cloth is stretched...[more]
rubbing
Abrasion or wear to the surface. Usually used in reference to a book's boards or dust-jacket.
New
A new book is a book previously not circulated to a buyer. Although a new book is typically free of any faults or defects,...[more]
foxed
Foxing is the age related browning, or brown-yellowish spots, that can occur to book paper over time. When this aging process...[more]
vignette
A decorative design or illustration placed at the beginning or end of a ...[more]
spine
The outer portion of a book which covers the actual binding. The spine usually faces outward when a book is placed on a shelf....[more]
gilt
The decorative application of gold or gold coloring to a portion of a book on the spine, edges of the text block, or an inlay in...[more]
First Edition
In book collecting, the first edition is the earliest published form of a book. A book may have more than one first edition in...[more]