home rare books Travel and Exploration More Rare Books from Michael Treloar Antiquarian Booksellers Discoveries in Australia; with an Account of the Coasts and Rivers explored and surveyed during the Voyages of… 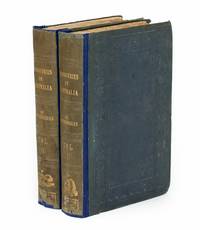 Discoveries in Australia; with an Account of the Coasts and Rivers explored and surveyed during the Voyages of H.M.S. 'Beagle', in the Years 1837-38-39-40-41-42-43... Also a Narrative of Captain Owen Stanley's Visits to the Islands in the Arafura Sea

Discoveries in Australia; with an Account of the Coasts and Rivers explored and surveyed during the Voyages of H.M.S. 'Beagle', in the Years 1837-38-39-40-41-42-43... Also a Narrative of Captain Owen Stanley's Visits to the Islands in the Arafura Sea

London: Boone, 1846. First Edition. Hardcover. London, Boone, 1846. Octavo, two volumes, [2] (inserted advertising leaf for this work), xii, [ii] (list of charts, verso blank), [ii] (errata, verso blank), 522 (last blank), 8 (publisher's catalogue) pages [first volume], and [4] (inserted prospectus for Siborne's 'History of the War ... in 1815'), viii, [ii] (list of charts, verso blank), 544 (last blank), 8 (publisher's catalogue) pages [second volume], plus 26 engraved or lithographed plates and 7 (of 8) folding maps (lacking the chart of Bass Strait); all advertising leaves, and the slip for Eyre (at the end of the second volume), are present, but the one for Dutton is missing. Original cloth later rebacked, retaining the original backstrips, with new endpapers (but retaining all but the original front flyleaf as well); new endpocket in the second volume (containing five of the maps); cloth a little bumped and rubbed at the extremities; spine sunned, with a few blemishes; plates generally a little foxed and offset, with occasional foxing elsewhere; the leading edge of one plate and an adjacent leaf are slightly proud of the rest, and now a little chipped; small (discoloured) tape repair to the gutter of the first title page; relevant newspaper cuttings on three advertising pages and the rear pastedown of the first volume; basically a decent uncut set. The facsimile signature inkstamp of E. Angas Johnson is on both title pages. Edward Angas Johnson (1873-1951) was an Adelaide medical practitioner, prominent in public health circles; his grandmother was a daughter of George Fife Angas; he was a significant collector of books, curios and historical relics ('Australian Dictionary of Biography'). Wantrup 89a.

If found to be incorrectly described, goods may be returned, provided notification is given within seven days of receipt. Postage and insurance are extra; uninsured parcels are sent at the purchaser's risk.

Seller rating:
This seller has earned a 5 of 5 Stars rating from Biblio customers.
Biblio.co.uk member since 2006
Adelaide, South Australia
Ask Seller a Question

The business was established in Adelaide in March 1976 and is a longstanding member of the Australian and New Zealand Association of Antiquarian Booksellers (ANZAAB) and the Australian Antique Dealers Association (AADA). A large out-of-print and antiquarian stock is maintained at our retail outlet in the centre of Adelaide; mail-order catalogues of our specializations are issued and a representative selection of our stock is online.

spine
The outer portion of a book which covers the actual binding. The spine usually faces outward when a book is placed on a shelf.... [more]
foxed
Foxing is the age related browning, or brown-yellowish spots, that can occur to book paper over time. When this aging process... [more]
verso
The page bound on the left side of a book, opposite to the recto page.
New
A new book is a book previously not circulated to a buyer. Although a new book is typically free of any faults or defects,... [more]
First Edition
In book collecting, the first edition is the earliest published form of a book. A book may have more than one first edition in... [more]
facsimile
An exact copy of an original work. In books, it refers to a copy or reproduction, as accurate as possible, of an original... [more]
plate
Full page illustration or photograph. Plates are printed separately from the text of the book, and bound in at production. I.e.,... [more]
Cloth
"Cloth-bound" generally refers to a hardcover book with cloth covering the outside of the book covers. The cloth is stretched... [more]
gutter
The inside margin of a book, connecting the pages to the joints near the binding.
octavo
Another of the terms referring to page or book size, octavo refers to a standard printer's sheet folded four times, producing... [more]
leaves
Very generally, "leaves" refers to the pages of a book, as in the common phrase, "loose-leaf pages." A leaf is a single sheet... [more]
offset
A technique of printing where the inked image or text is ... [more]
sunned
Damage done to a book cover or dust jacket caused by exposure to direct sunlight.  Very strong fluorescent light can cause... [more]
rebacked
having had the material covering the spine replaced. ... [more]