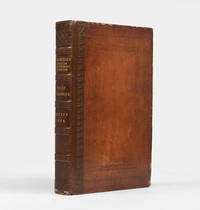 Comedies, Histories, and Tragedies. Published according to the true Original Copies. The third Impression.

Comedies, Histories, and Tragedies. Published according to the true Original Copies. The third Impression.: And unto this Impression is added seven Playes, never before Printed in Folio.

London: Printed for P.C. 1664 (first-issue title: Philip Chetwinde,, 1663). The rare Third Folio, many copies of which were destroyed in the Great Fire of London, this copy with both states of the title page and the additional plays, including Pericles Median folio (329 x 212 mm). Early 19th-century blind-tooled russia, edges gilt (sympathetically rebacked), dark green endpapers, gilt edges. Housed in a dark brown quarter morocco solander box by the Chelsea Bindery. First-issue title in the state without the portrait bound at front, 514 leaves: complete. Roman and italic text types, cursive for headings, various larger romans and cursives in the preliminaries. Double column, 66 lines, headlines and catchwords, pages box-ruled, woodcut head- and tailpieces and initials, Shakespeare's portrait in third state. Sig. Z6 supplied from a shorter copy, B1 with long tear skilfully mended with loss of one letter, six small rust-holes and 11 small paper flaws affecting approximately 20 letters, a few short marginal repaired tears, some occasional minor dust-soiling, otherwise a fine fresh copy. Third folio edition of Shakespeare's plays, generally regarded as the rarest of the 17th-century folio editions. An unknown number of copies is thought to have been destroyed in the Great Fire of London of 1666. The third folio is a reprint of the second (1632), but the second issue adds seven plays to the corpus, although of these only Pericles is now considered authentic. The first issue came out without the added plays and with or without the portrait on the 1663 title. The second issue, as here, added the seven plays and is known with the frontispiece-portrait captioned by Jonson's verses cancelling the "To the Reader" leaf and the 1664 title cancelling the 1663 title, or with both the cancels and the cancellanda present. Three paper-stocks in the preliminaries and the beginning and final quires of the book reappear in the added plays (all printed by Roger Daniel), indicating that the decision to print the extra quires was not delayed long. They no doubt added to the cost of the book, and a customer may have been given the choice of their inclusion or omission even after they were made available; early buyers of first-issue copies could no doubt purchase the extra plays separately and their binders might not always trouble with the intended cancellations, but simply add the new title and frontispiece. Provenance: Herman Frasch Whiton, probably American sailor and Olympic champion (1904-1967, bookplate); Paul Francis Webster (1907-1984), noted lyricist (bookplate; his sale, Sotheby's New York, 24 April 1985, lot 75); Pierre Bergé (book label; his sale, Paris, 2015). Wing S-2913 & S-2914; Greg III, pp 1116-19; cf Pforzheimer 908 & 909.

reprint
Any printing of a book which follows the original edition. By definition, a reprint is not a first edition.
gilt
The decorative application of gold or gold coloring to a portion of a book on the spine, edges of the text block, or an inlay in...[more]
folio
A folio usually indicates a large book size of 15" in height or larger when used in the context of a book description....[more]
New
A new book is a book previously not circulated to a buyer. Although a new book is typically free of any faults or defects,...[more]
edges
The collective of the top, fore and bottom edges of the text block of the book, being that part of the edges of the pages of a...[more]
fine
A book in fine condition exhibits no flaws. A fine condition book closely approaches As New condition, but may lack the...[more]
title page
A page at the front of a book which may contain the title of the book, any subtitles, the authors, contributors, editors, the...[more]
morocco
Morocco is a style of leather book binding that is usually made with goatskin, as it is durable and easy to dye. (see also...[more]