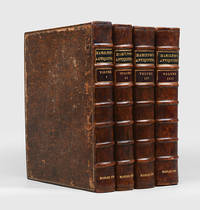 Collection of Etruscan, Greek, and Roman Antiquities: from the Cabinet of the Hon. W. Hamilton, His Britannick Maiesty's Envoy Extraordinary and Plenipotentiary at the Court of Naples.

Naples: Morelli,, 1766-7 [actually 1767-76]. One of the most influential art publications of the 18th century", the basis for the Wedgwood style, which also helped to establish modern archaeological discourse 4 volumes, folio (470 x 340 mm). Contemporary mottled calf, skilfully rebacked and refurbished, two-line gilt border on sides, gilt foliate corner pieces, marbled endpapers. Housed in custom purple cloth solander boxes, dark red morocco labels. Hand-coloured engraved titles in English and French, 5 engraved dedication plates, 436 engraved plates (183 hand coloured, 73 double-page, 4 folding), engraved head- and tailpieces and initials (printed in colours in vol. IV); parallel text in English and French in vols. I and II, five dedications, "Avertissement" in vol. II, "Avant Propos" in vol. IV. Light abrasions and overall craquelure to sides, touch of marginal dust-marking in places, a very good set. First edition of this magnificent and notably rare work, of which only 100 complete sets were produced, a publication which had an enormous influence on contemporary taste. Sir William Hamilton (1731-1803), diplomatist and art collector, was appointed British envoy-extraordinary to the Spanish court at Naples in 1764, during that city's Golden Age under the rule of the Spanish Bourbons. An avid antiquarian, Hamilton assembled one of the world's finest collections of Greek and Roman antiquities. The core of his collection was bought en bloc from the Porcinari family, to whom he had been introduced by the buccaneering connoisseur and amateur art dealer Pierre-François Hugues (who styled himself Baron d'Hancarville). Hamilton added several more choice items before selling the entire collection to the British Museum in 1772 for £8,400, where it became one of main collections in the department of Greek and Roman antiquities. Before the collection was shipped to England, Hamilton arranged for Hancarville to oversee the cataloguing and drawing of every item. Under Hancarville's direction, the artists who worked on the execution of the large-format plates, along with the unusually elaborate initials and vignettes often based on Piranesi originals, included the draughtsmen Edmondo Beaulieu, Giovanni Battista Tierce, and Giuseppe Bracci, and the engravers Filippo de Grado, Carlo Nolli, Tommaso Piroli, Antoine Alexandre Joseph Cardon, Antonio Lamberti, and Carmine Pignatari. Giuseppe Bracci developed a new printing process specifically for the plates. The final published work stands as a triumph of book production, one of the most influential art publications of the 18th century, and one of the most beautiful books ever printed. "Antiquités étrusques, grecques et romaines spread the vogue throughout Europe for the 'antique' in furnishings, porcelain, wall coverings, and interior decoration in general. Within barely a year of the publication of the first volume Josiah Wedgwood had opened his pottery works, Etruria, in Staffordshire, and thrown six black basalt 'first day vases' based on vases in Hamilton's publication. Countless other subsequent Wedgwood articles and designs were inspired by the work" (ODNB). "Collectors, such as Sir William Hamilton, the British envoy to Naples, vied with the king in commissioning publications of their own large collections of antique vases... [The present work] ranks among the most lavish books produced in the eighteenth century. These folios, along with many others, provided a wealth of images that enjoyed an astonishing popularity at the end of the eighteenth and beginning of the nineteenth century. Perhaps even more importantly, they also helped to establish modern archaeological discourse" (J. Patrice Marandel in Museum of Modern Art: Europe in the Age of the Enlightenment and Revolution, 1987, p. 7). Vols. I and II were printed in an edition of 500 copies, but only 100 copies were printed of vols. III and IV. Although the two pairs of volumes are dated 1766 and 1767, in fact vol. I was delayed until the end of 1767 and vol. II was published in 1769. Hancarville's financial problems led him to forfeit the finished plates for the final volumes to Florentine creditors in 1773; Hamilton's intervention and additional funding led to those two volumes being published in 1776. Provenance: from the library of Benjamin Gott (1762-1840), cloth merchant and manufacturer, acquired at the British Museum duplicate sale of 1804 (front covers with gilt initials "M[useum]. B[ritannicum].", inked accession stamp on English titles verso, and release stamps dated 1804). Gott was a key figure of the Industrial Revolution. His engraved armorial bookplate bears a facsimile of his signature and the name of his country seat, Armley House, a villa on the edge of Leeds acquired in 1803 and landscaped by Repton, most unusually incorporating distant views of Gott's factory and Leeds. In 1822 Sir Robert Smirke was engaged to remodel Armley House in the Greek-revival style as a fitting home for his growing art collection. Gott was a patron of his second cousin, the neo-classical sculptor Joseph Gott (1785-1860), who trained under John Flaxman. Hamilton's opulent books would have matched his aspirations for his new home and been of considerable benefit to his cousin, in the year prior to his enrolment in the Royal Academy Schools. Berlin Katalog 890; Blackmer 845 ("this sumptuous work"); Brunet I, 321 ("ouvrage précieux, exécuté avec beaucoup de luxe"); Cohen-de Ricci 474; Lowndes IV p. 989 ("a splendid work"); Vinet 1528.

morocco
Morocco is a style of leather book binding that is usually made with goatskin, as it is durable and easy to dye. (see also...[more]
New
A new book is a book previously not circulated to a buyer. Although a new book is typically free of any faults or defects,...[more]
rebacked
having had the material covering the spine replaced. ...[more]
bookplate
Highly sought after by some collectors, a book plate is an inscribed or decorative device that identifies the owner, or former...[more]
First Edition
In book collecting, the first edition is the earliest published form of a book. A book may have more than one first edition in...[more]
folio
A folio usually indicates a large book size of 15" in height or larger when used in the context of a book description....[more]
facsimile
An exact copy of an original work. In books, it refers to a copy or reproduction, as accurate as possible, of an original...[more]
verso
The page bound on the left side of a book, opposite to the recto page.
gilt
The decorative application of gold or gold coloring to a portion of a book on the spine, edges of the text block, or an inlay in...[more]
calf
Calf or calf hide is a common form of leather binding.  Calf binding is naturally a light brown but there are ways to treat...[more]
Cloth
"Cloth-bound" generally refers to a hardcover book with cloth covering the outside of the book covers. The cloth is stretched...[more]