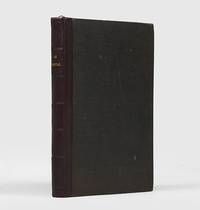 Cloth
"Cloth-bound" generally refers to a hardcover book with cloth covering the outside of the book covers. The cloth is stretched...[more]
quarto
The term quarto is used to describe a page or book size. A printed sheet is made with four pages of text on each side, and the...[more]
gutter
The inside margin of a book, connecting the pages to the joints near the binding.
gilt
The decorative application of gold or gold coloring to a portion of a book on the spine, edges of the text block, or an inlay in...[more]
fore edge
The portion of a book that is opposite the spine.   That part of a book which faces the wall when shelved in a...[more]
foxed
Foxing is the age related browning, or brown-yellowish spots, that can occur to book paper over time. When this aging process...[more]
New
A new book is a book previously not circulated to a buyer. Although a new book is typically free of any faults or defects,...[more]
bookplate
Highly sought after by some collectors, a book plate is an inscribed or decorative device that identifies the owner, or former...[more]
verso
The page bound on the left side of a book, opposite to the recto page.
title page
A page at the front of a book which may contain the title of the book, any subtitles, the authors, contributors, editors, the...[more]
morocco
Morocco is a style of leather book binding that is usually made with goatskin, as it is durable and easy to dye. (see also...[more]
facsimile
An exact copy of an original work. In books, it refers to a copy or reproduction, as accurate as possible, of an original...[more]
spine
The outer portion of a book which covers the actual binding. The spine usually faces outward when a book is placed on a shelf....[more]
inscribed
When a book is described as being inscribed, it indicates that a short note written by the author or a previous owner has...[more]
leaves
Very generally, "leaves" refers to the pages of a book, as in the common phrase, "loose-leaf pages." A leaf is a single sheet...[more]
fine
A book in fine condition exhibits no flaws. A fine condition book closely approaches As New condition, but may lack the...[more]
rebacked
having had the material covering the spine replaced. ...[more]
First Edition
In book collecting, the first edition is the earliest published form of a book. A book may have more than one first edition in...[more]