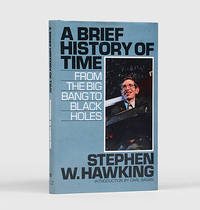 A Brief History of Time.

A Brief History of Time.: From the Big Bang to Black Holes. Introduction by Carl Sagan. Illustrations by Ron Miller.

London: Bantam Press,, 1988. A near-fine copy Octavo. Original blue cloth, spine lettered in gilt. With the dust jacket. Illustrations and diagrams throughout. Spine ends a little rubbed, top and fore edge a little foxed, as usual; else a near-fine, unmarked copy, in the near-fine jacket, light foxing to verso, not price-clipped. First UK edition, first impression, published simultaneously with the US edition on 1 April 1988. One of the most important scientific works of the second half of the 20th century and a masterpiece of scientific popularization, A Brief History of Time details for a lay readership the origin and eventual fate of the universe. Loosely inserted is a press cutting of a review for this work.

A Brief History of Time is a popular science book written by Stephen Hawking and first published by the Bantam Dell Publishing Group in 1988. It became a best-seller and has sold more than 9 million copies. It was also on the London Sunday Times best-seller list for more than four years. There is also a documentary by the same name, directed by Errol Morris and released in 1991. Unlike the book, the documentary is primarily a biography of Stephen Hawking.

As a grade 11 student who is greatly interested in Physics, I loved this book. Dr. Hawking managed to explain our universe in great and accurate detail, but in forms and words simple enough for a student to understand. This book was very thorough when explaining everything about our universe, from the forces that control it, to the particles that occupy it, and the cause for all of it. He also presented an unique perspective that compels me to further my knowledge in these areas. I am very glad I chose this book for my physics project and for any future projects I will absolutely choose another book by Dr. Hawking.

spine
The outer portion of a book which covers the actual binding. The spine usually faces outward when a book is placed on a shelf....[more]
jacket
Sometimes used as another term for dust jacket, a protective and often decorative wrapper, usually made of paper which wraps...[more]
Cloth
"Cloth-bound" generally refers to a hardcover book with cloth covering the outside of the book covers. The cloth is stretched...[more]
gilt
The decorative application of gold or gold coloring to a portion of a book on the spine, edges of the text block, or an inlay in...[more]
octavo
Another of the terms referring to page or book size, octavo refers to a standard printer's sheet folded four times, producing...[more]
foxed
Foxing is the age related browning, or brown-yellowish spots, that can occur to book paper over time. When this aging process...[more]
fore edge
The portion of a book that is opposite the spine.   That part of a book which faces the wall when shelved in a...[more]
verso
The page bound on the left side of a book, opposite to the recto page.