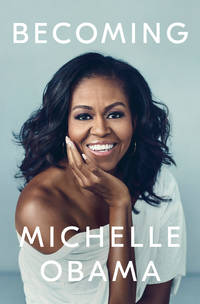 New York: Crown, 2018. First edition (stated). Hardcover. Very mild rubbing to spine head and foot, extremely light soiling to front board, extremely light soiling to rear DJ, extremely gentle rubbing to DJ, very bright pages, tight binding, else Near Fine(+) in Near Fine(+) DJ.. Large octavo in blue-grey DJ, white spine, xiii, 426 pages, 16 unnumbered pages of plates, chiefly color illustrations (some b&w), portraits ; 25 cm. African American women lawyers -- Illinois -- Chicago -- Biography. || "An intimate, powerful, and inspiring memoir by the former First Lady of the United States. When she was a little girl, Michelle Robinson's world was the South Side of Chicago, where she and her brother, Craig, shared a bedroom in their family's upstairs apartment and played catch in the park, and where her parents, Fraser and Marian Robinson, raised her to be outspoken and unafraid. But life soon took her much further afield, from the halls of Princeton, where she learned for the first time what if felt like to be the only black woman in a room, to the glassy office tower where she worked as a high-powered corporate lawyer--and where, one summer morning, a law student named Barack Obama appeared in her office and upended all her carefully made plans. Here, for the first time, Michelle Obama describes the early years of her marriage as she struggles to balance her work and family with her husband's fast-moving political career. She takes us inside their private debate over whether he should make a run for the presidency and her subsequent role as a popular but oft-criticized figure during his campaign. Narrating with grace, good humor, and uncommon candor, she provides a vivid, behind-the-scenes account of her family's history-making launch into the global limelight as well as their life inside the White House over eight momentous years--as she comes to know her country and her country comes to know her. [This book] takes us through modest Iowa kitchens and ballrooms at Buckingham Palace, through moments of heart-stopping grief and profound resilience, bringing us deep into the soul of a singular, groundbreaking figure in history as she strives to live authentically, marshaling her personal strength and voice in service of a set of higher ideals. In telling her story with honesty and boldness, she issues a challenge to the rest of us: Who are we and who do we want to become?"--Jacket. || Contents: Becoming me -- Becoming us -- Becoming more -- Epilogue.

In a life filled with meaning and accomplishment, Michelle Obama has emerged as one of the most iconic and compelling women of our era. As First Lady of the United States of America—the first African American to serve in that role—she helped create the most welcoming and inclusive White House in history, while also establishing herself as a powerful advocate for women and girls in the U.S. and around the world, dramatically changing the ways that families pursue healthier and more active lives, and standing with her husband as he led America through some of its most harrowing moments. Along the way, she showed us a few dance moves, crushed Carpool Karaoke, and raised two down-to-earth daughters under an unforgiving media glare. In her memoir, a work of deep reflection and mesmerizing storytelling, Michelle Obama invites readers into her world, chronicling the experiences that have shaped her—from her childhood on the South Side of Chicago to her years as an executive balancing the demands of motherhood and work, to her time spent at the world’s most famous address. With unerring honesty and lively wit, she describes her triumphs and her disappointments, both public and private, telling her full story as she has lived it—in her own words and on her own terms. Warm, wise, and revelatory, Becoming is the deeply personal reckoning of a woman of soul and substance who has steadily defied expectations—and whose story inspires us to do the same. Becoming  sold 1.4 million copies in its first week and has gone on to sell over 10 million copies. It is one of the best selling auto-biographies ever.

Books may be placed on reserve for one week. Refunds may be issued if book is not as described and is returned in same condition as it was originally shipped, and within two weeks of order. A nominal re-stocking fee may apply.

Seller rating:
This seller has earned a 4 of 5 Stars rating from Biblio customers.
Biblio.co.uk member since: 2005
Oakland, California
Ask Seller a Question

octavo
Another of the terms referring to page or book size, octavo refers to a standard printer's sheet folded four times, producing...[more]
rubbing
Abrasion or wear to the surface. Usually used in reference to a book's boards or dust-jacket.
spine
The outer portion of a book which covers the actual binding. The spine usually faces outward when a book is placed on a shelf....[more]
tight
Used to mean that the binding of a book has not been overly loosened by frequent use.
First Edition
In book collecting, the first edition is the earliest published form of a book. A book may have more than one first edition in...[more]