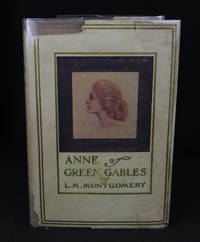 A very early example of the great classic in dust jacket. Superlatively scarce. One of less than five copies 1909 or earlier in dust jacket we have knowledge of, only one of which appeared on the public market. That copy appeared at auction at Sotheby's in 2010 with a $20,000 to $30,000 estimate but was removed from the sale before the auction date. So no copies this early in jacket have actually been auctioned in the last 100 years.

Because no copies of the first printing in dust jacket are known to exist, this is a collector's best bet for an early jacketed example. If a first printing were to surface, you'd be looking at $75,000 to $100,000+.

We also have the rare first printing of Anne of the Island in dust jacket listed at this time.

Anne of Green Gables is the first novel by Canadian author Lucy Maud Montgomery. The story tells of the adventures of Anne Shirley, an 11-year-old orphan girl who is mistakenly sent to Matthew and Marilla Cuthbert, a middle-aged brother and sister who had intended to adopt a boy to help them on their farm in Prince Edward Island. Like many of her contemporaries, Montgomery did not consider submitting her first novel to a Canadian publisher, convinced that a more lucrative deal could be made with an American firm. The novel was completed in 1905, but was rejected by four major American publishing houses, and it was not until 1907 that Montgomery found a publisher. L.C. Page & Co. finally published Anne of Green Gables in 1908. Anne of Green Gables has sold more than 50 million copies and has been translated into more than 30 languages. Following the success of her first novel, Montgomery went on to write seven more books about Anne, following the beloved protagonist through adulthood and motherhood. Several novels in the series have been adapted and made into a successful television miniseries. Montgomery museums, plays, and houses on Prince Edward Island draw international visitors.

For juveniles? Realy? I am 58 and always liked it. And tears drop on my cheeks every time.

Seller rating:
This seller has earned a 5 of 5 Stars rating from Biblio customers.
Biblio.co.uk member since 2021
WILLIAMSBURG, Kentucky
Ask Seller a Question

At LaCelle Rare Books we offer rare and important books from Literary Classics and classic Childens Books to Americana and Civil War. Over the years we've had many of the great landmarks of literature as well as thousands of interesting and collectible books in all categories.

Fair
is a worn book that has complete text pages (including those with maps or plates) but may lack endpapers, half-title, etc.... [more]
hinge
The portion of the book closest to the spine that allows the book to be opened and closed.
A.N.
The book is pristine and free of any defects, in the same condition as ... [more]
jacket
Sometimes used as another term for dust jacket, a protective and often decorative wrapper, usually made of paper which wraps... [more]
cracked
In reference to a hinge or a book's binding, means that the glue which holds the opposing leaves has allowed them to separate,... [more]
tight
Used to mean that the binding of a book has not been overly loosened by frequent use.

The Civil Rights Movement of the 1960s and '70s was an explosive time in American history, and it inspired explosive literature. From Malcolm X to Martin Luther King, Jr., browse some of the most collectible books from and about that era.