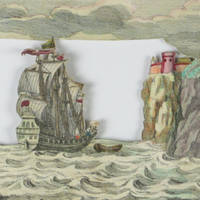 Another year in the books, and for many, it seemed to last far longer than a mere twelve months. Despite the rollicking ride of our current social, economic and political climate, the rare and collectible book trade seems to be booming in the face of the "death of books" that was expected by this point in time.

Here are a few points of some of the most interesting books sold by Biblio booksellers in 2018:

Children's books are always popular (see our book collecting by the decade series for more) and we saw quite a lot of fantastic early moveable books find new homes this year, from a fold-out Victorian puppet stage to a lovely German pop-up book about farm animals. The market for classic children's literature remains strong with books and sets by Dr. Seuss, A. A. Milne, Kenneth Grahame, and Antoine De Saint-Exupery leading the race this year.

Notable among literature sold this year were many books by Jane Austen and an almost absurd amount of Charles Dickens works. Books by Sir Arthur Conan Doyle and Dame Agatha Christie are still selling at a steady clip. In the political literature front, Ayn Rand was edged out by George Orwell in popularity this year. Tolkien remains one of the most popular authors to purchase, especially the nice limited edition prints.

The Well of Loneliness by Radclyffe Hall caused a serious scandal when it was published in 1928, with a trial in the US and the UK courts declaring it obscene. The novel was only scandalous in that it was about a lesbian and that it was one of the first books to openly discuss the realities of life in that era for “inverts” or homosexuals. The obscenity trials sought to suppress the book but did the opposite, launching it into the spotlight and doing exactly as the author wished. The first edition sold this year on Biblio was particularly interesting because it included an inscription by the author as well as a few typed letters about the obscenity trials, including one from Hall and signed by her hand.

Books about politics are always something sought after from all sides of the political spectrum. As ever, works by Winston Churchill out-sold all modern politicians, although we sold quite a few books by former President George H. W. Bush after his death. There was also a good deal of broadsides, pamphlets, and political ephemera trading hands, from copies of the American constitution to letters from anarcho-communists to original publications about the Gunpowder Treason Plot. We also saw a copy of the Malleus Maleficarum sold as well as a book detailing the cruelties inflicted on people by the Inquisition.

With shows like the "Great British Bake Off" enchanting viewers around the world and the global search for hygge and the rise of home brewing and cocktail-crafting, books about food and drink are always increasing in popularity. While she's always been a popular author, works by Julia Child were very strong in 2018. We also saw many of Anthony Bourdain's titles find new homes in the wake of his passing. Want to browse such wares in person? One of our sellers, LizzYoung Books, opened a bookshop focused on food and drink books in Brooklyn this year.

Art was a hot ticket on Biblio this year, with everything from museum catalogs, original art prints, photography books, collections, and fine lithographs being sold left and right. In fact, among our top ten most expensive books sold this year were two very interesting items: a modern reprint of the famed Peterborough Bestiary illuminated manuscript, circa 1300, and an engraved woodblock from 1913 used in the printing of the Ashendene Press edition of Morte D'Arthur.

The three most expensive sales on Biblio this year were:

Winnie the Pooh; When We Were Very Young; Now We Are Six; The House at Pooh Corner: A Complete Set of First Editions by A. A. Milne - $12,000

Here are some of the rest of the interesting items sold in 2018: