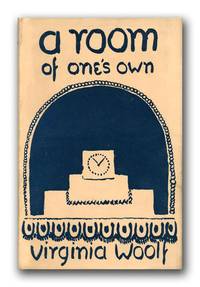 Named after their house in Richmond, London, Leonard and Virginia Woolf founded Hogarth Press in July 1917. After purchasing a hand press and teaching themselves to use it, the Woolfs published their first text: Two Stories, a pamphlet containing Three Jews by Leonard and The Mark on the Wall by Virginia with woodcuts by Dora Carrington. The pamphlet was sold by subscription only, a practice that continued until 1923. But because they were self-taught, Two Stories had irregular spacing and blotted ink, making the finished product amateurish.

Initially, printing was a hobby for the Woolfs, and a diversion for Virginia when writing became too stressful. Printing had become a form of aesthetic therapy for Virginia, who had been binding her own books since age nineteen. However, the process ended up contributing to and changing her work rather than providing her an escape. Setting each unit of type with her own hands and arranging the empty spaces between words magnified Virginia’s sense of how a text appears visually on the page, forcing her to reevaluate word choice, punctuation use, and sentence structure. In this, Hogarth paved the way for a new direction in Virginia?s writing, one that playfully experimented with form and composition. Hogarth Press also allowed both Virginia and Leonard to print their own work, free from editorial censorship. This was particularly important to Virginia as it allowed her the freedom to do as she wished as a woman writer without criticism of a male editor.

During the interwar period (from the end of World War I and the beginning of World War II), printing grew from a hobby to a business for the Woolfs as they began using commercial printers. In 1922, Hogarth published its first full-length book, Virginia’s Jacob’s Room. In 1924, at the suggestion of their friend James Strachey, the Press agreed to publish Sigmund Freud’s collected papers. In addition to publishing works on psychoanalysis and translations of foreign works, Hogarth Press was at the forefront of publishing the works of members of the Bloomsbury group, including Clive Bell, T.S. Eliot, E.M. Forster, Roger Fry, Katherine Mansfield, Vita Sackville-West. Between 1917 and 1946 the press published 527 titles, including The Devils (1922) by Fyodor Dostoyevsky, translated by Virginia Woolf herself; poetry by Ruth Manning-Sanders such as Karn (1922) and Martha Wish-You-Ill (1926); the first UK book edition of The Waste Land by T. S. Eliot (1924); and Laurens van der Post’s first book, In a Province (1934).

In 1938, Virginia relinquished her interest in the business. Leonard Woolf ran Hogarth Press as a partnership and John Lehmann then until 1946, when disagreements between the two led to Woolf buying Lehmann out by selling his half share to Chatto & Windus. With Chatto & Windus, Hogarth Press published The Standard Edition of the Complete Psychological Works of Sigmund Freud (1956-1974), in collaboration with Anna Freud, as well as the first published seminar of Jacques Lacan, The Four Fundamental Concepts of Psychoanalysis (1977).

Today, as imprint of The Crown Publishing Group, which is part of Random House, Hogarth distinguishes itself as a new home for a new generation of literary talent - “an adventurous fiction imprint with an accent on the pleasures of storytelling and a broad awareness of the world.”

First editions from Hogarth Press have no additional printings listed on the title page.