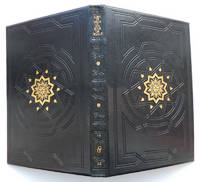 Sisters Gwendoline and Margaret Davies established Gregynog Press, named after their home, Gregynog Hall, in rural Mid-Wales in 1922. Early on, the press gained a reputation for producing high-quality limited edition books, primarily on a Victoria platen press, and quickly became one of the leading private presses of its day. Gregynog was unique in that all components of its books were created under one roof: design, typography, illustration, printing, and binding. But soon after World War I, the general focus of the press began to deflect away from luxury and in 1940, the press was forced to close, having printed 42 books, three for private circulation and well over two hundred pieces of ephemera. In less than two decades, Gregynog had distinguished itself in the world of fine books, but at this point, its first phase of printing was finished. After the death of Gwendoline Davies in 1954, Margaret donated most of the machinery used by Gregynog Press to the National Library of Wales.

However, the press was re-established in 1978 under its Welsh title, Gwasg Gregynog. Continuing the traditions of its forebears, Gwasg Gregynog placed great emphasis hot-metal typesetting, letterpress printing and hand-binding; illustrations by leading contemporary artists; printing on hand-made and mould-made papers, and the use of the finest binding materials. In addition to producing beautiful books in both Welsh and English, the press has contributed to the highlights of Welsh life and culture. In 1999, Gwasg Gregynog was commissioned to produce the inaugural document for the opening of the Welsh National Assembly. In celebration of this occasion, a 250 limited edition souvenir volume was printed. In 2002, the press published Cutting Images, a limited edition volume of more than 50 linocuts by one of Wales’ greatest artists, Sir Kyffin Williams, which sold out three weeks after its launch. Gwasg Gregynog was registered as a charity that year as well. The History of the Gregynog Press was published in 1980 by the Private Libraries’ Association.