Home Whitman, Walt Leaves Of Grass
Leaves of Grass (1855) is a poetry collection by the American poet Walt Whitman. Among the poems in the collection are "Song of Myself," "I Sing the Body Electric," "Out of the Cradle Endlessly Rocking," and in later editions, Whitman's elegy to the assassinated President Abraham Lincoln, "When Lilacs Last in the Dooryard Bloom'd. " Whitman spent his entire life writing Leaves of Grass, revising it in several editions until his death. The first edition published in 1855 contained 12 poems on 95 pages. The final edition published contained almost 400 poems.

On May 15, 1855, Whitman registered the title Leaves of Grass with the clerk of the United States District Court, Southern District of New Jersey, and received its copyright. The first edition was published on July 4, 1855, in Brooklyn, at the printing shop of two Scottish immigrants, James and Andrew Rome, whom Whitman had known since the 1840s. Whitman paid for and did much of the typesetting for the first edition himself. The book did not include the author's name, and instead offered an engraving by Samuel Hollyer depicting Whitman in work clothes and a jaunty hat, arms at his side. Early advertisements for the first edition appealed to "lovers of literary curiosities" as an oddity. Sales on the book were few, but Whitman was not discouraged.

The first edition was very small, collecting only twelve unnamed poems in 95 pages. Whitman once said he intended the book to be small enough to be carried in a pocket. "That would tend to induce people to take me along with them and read me in the open air: I am nearly always successful with the reader in the open air", he explained.  About 800 were printed, though only 200 were bound in its trademark green cloth cover.  The only American library known to have purchased a copy of the first edition was in Philadelphia.  The poems of the first edition, which were given titles in later issues, were "Song of Myself", "A Song for Occupations", "To Think of Time", "The Sleepers", "I Sing the Body Electric", "Faces", "Song of the Answerer", "Europe: The 72d and 73d Years of These States", "A Boston Ballad", "There Was a Child Went Forth", "Who Learns My Lesson Complete?", and "Great Are the Myths". 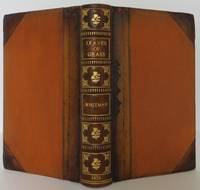 Description:
Whitman, 1876. Special Edition. Hardcover. Very Good. The signed "author's edition," signed as called for by the author on the title page, but also additionally inscribed and dated July 27, 1876, by the author on the front free endpaper. Also bears the recipient's ownership signature on the front free endpaper, Ms. K. Hillard. This author's edition was published… Read more
Add to Wishlist
Item Price
£17,050.00 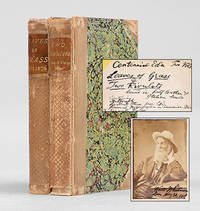 Description:
Camden, NJ: 1876. Signed set Signed copies of the Centennial edition (which overall comprising the first edition, second printing of Two Rivulets, and fifth edition, third printing, second issue of Leaves of Grass), of which around 800 and 600 copies respectively were printed. The portrait of Whitman in Two Rivulets is signed and dated by the author; the… Read more
Add to Wishlist
Item Price
£15,000.00 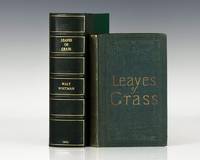 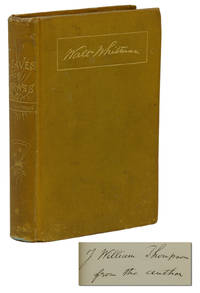 Description:
Thayer and Eldridge. Third edition, first printing, first issue; 1000 copies printed. First Edition by a Publishing House, with more than 100 additional poems (the Calamus poems) than the prior two self published editions. Myerson's Binding A, in deep purplish-red pebble-grain cloth with beveled edges, goldstamped spine with title, front cover blindstamped with title as on spine, but with drawing… Read more
Add to Wishlist
Item Price
£4,688.75 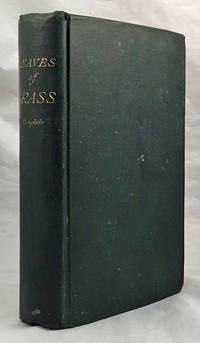 Description:
This is the fourth Leaves of Grass. The failure of Thayer & Eldridge, publisher of the third edition (Boston, 1860), left Whitman in search of a publisher. The poet decided that the events of the Civil War called for another reimagining of Leaves of Grass. Whitman returned to his earlier practice and financed the publication himself, engaging the New York… Read more
Add to Wishlist
Item Price
£2,983.75 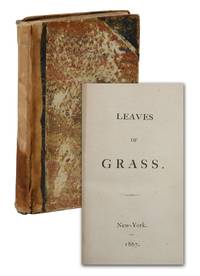 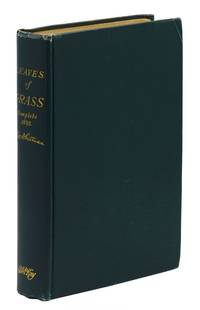 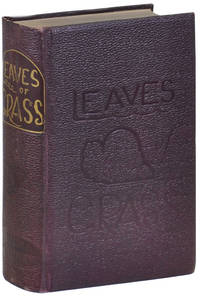 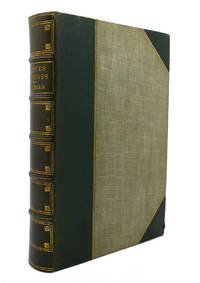 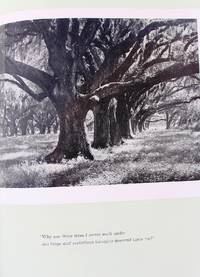 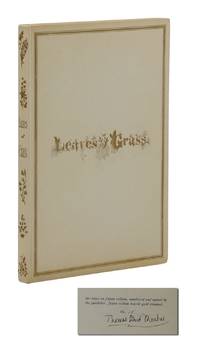 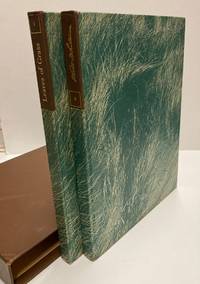 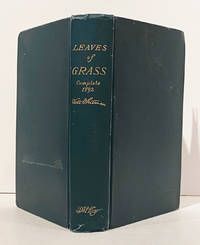 Description:
Portland, Maine: Thomas Bird Mosher. One of 50 numbered copies on Japan vellum, signed by Thomas Bird Mosher. Nice copy in very good+ to near fine. Has prior owner's gift inscription and bookplater. Large or heavy book and may require extra postage. No AMAZON international order on this title. Size: 4to - over 9¾" - 12" tall . Very Good… Read more
Add to Wishlist
Item Price
£1,065.63

Description:
Washington, D.C.: no publisher, 1872. BAL 21407. Published anonymously. Bound with the 1872 edition of Passage to India. This edition corrects various errors in the 1871 editions of both, and adds a poem to the second title not included in its earlier printing. Publisher’s cloth; bubbled; some wear; minor page stains; good to very good.
Add to Wishlist
Item Price
£852.50 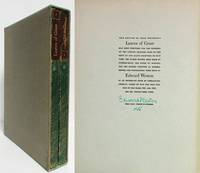 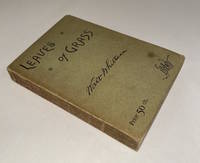 Description:
A rare survival in original wrappers. This is an undated printing of McKay's "Deathbed Edition," complete with the full text extended to p. 438 and including the Hollyer portrait of Whitman at p. 28. This printing, an effort to market Whitman in a cheap but complete edition, is not noted in Myerson. Provenance: pencil inscription of C. L. Lewes dated… Read more
Add to Wishlist
Item Price
£682.00 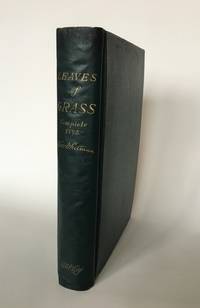 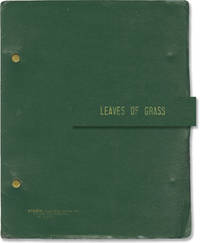 Description:
Portland, ME: Thomas B. Mosher, 1920. Bound in Dark Green cloth, stamped in gold. With the title on the front and black panels of book with gilt edging on both panels. The second facsimile edition, limited to 500 copies. This is a near perfect copy with no discernible flaws and the original dust jacket has one tiny… Read more
Add to Wishlist
Item Price
£468.88 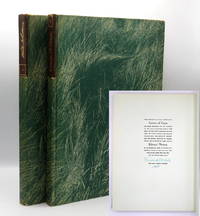 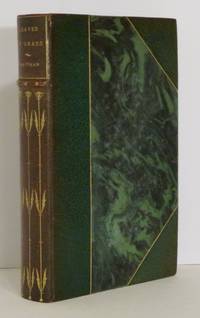 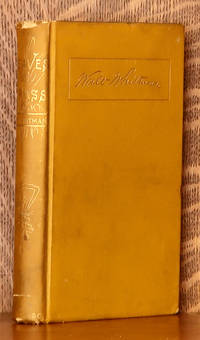 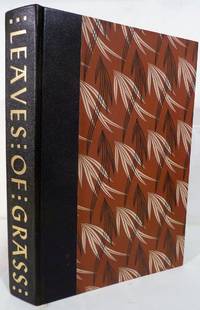 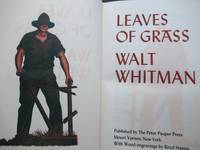 Seller
First Folio
Published
1943
Condition
Spine with some spotting, all else fine. In slipcase that is sound buit quite worn
Edition
Limited to 1100 copies, this not numbererd
Item Price
£341.00

Description:
Mount Vernon, NY: The Peter Pauper Press, 1943. Limited to 1100 copies, this not numbererd. Spine with some spotting, all else fine. In slipcase that is sound buit quite worn. Limited to 1100 copies, this not numbererd. Folio. 400p. [v]. Illustrated with two-color wood engravings by Boyd Hanna, printed directly from the blocks. Gilt-titled morocco spine over printed… Read more
Add to Wishlist
Item Price
£341.00 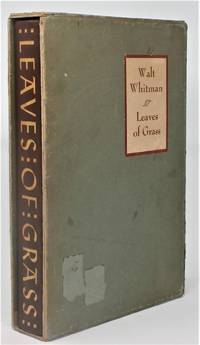 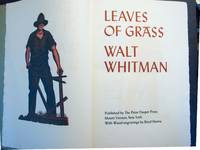 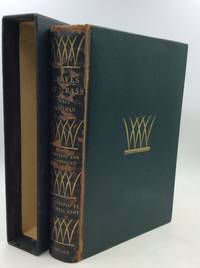 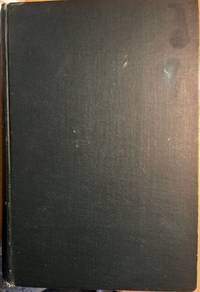 Description:
Philadelphia: David McKay, (1900). Octavo. An octavo, 438 pages, bound in original forest green cloth with gilt titles on spine. There is some rubbing and wear to the binding as well as a few places of discoloration but overall this remains a nice bright copy of the "Death Bed Edition". Contains First and Second Annex as well as " A… Read more
Add to Wishlist
Item Price
£298.38 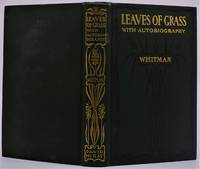 This copy of Leaves of Grass offered for sale by Bookbid Rare Books for $20,000.00

First Editions of Leaves Of Grass at a Glance