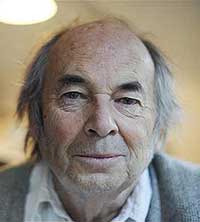 Quentin Blake (b. 1932) is an English illustrator and children’s writer. Born in outside of London, Blake went to Chislehurst and Sidcup Grammar School, where there is now a Quentin Blake Art Building. Having drawn since he was five, Blake’s first published drawing appeared in Punch magazine when he was just sixteen years old. Blake served two years in the Royal Army Educational Corps, during which he illustrated English Parade, a booklet to help soldiers learn to read. Following his time in the National Service, Blake studied English at Downing College from 1953 to 1956, but because he was unsure as to whether he could make a living out of being an artist, Blake also received a postgraduate teaching diploma from the University of London. He then taught at the Royal College of Art for over twenty years, heading the Illustration department from 1978 to 1986.

In 1960, Blake illustrated his first children’s book, John Yeoman’s A Drink of Water and in 1968, he wrote his first children’s book, Patrick, which he illustrated in full color. In 1974, Blake illustrated the first Dr. Suess book that was not illustrated by the author himself, A Great Day for Up! That same year, he illustrated Russell Hoban?s How Tom Beat Captain Najork and his Hired Sportsmen, the first of many collaborations between the two. Blake also began long-lasting collaborations with Michael Rosen, Joan Aiken, and - most famously - Roald Dahl. The Enormous Crocodile (1978) was the first Blake/Dahl collaboration, followed by The Twits (1980), The BFG (1982), and Matilda (1988) among others. Blake and Dahl continued to work together closely until Dahl’s death in 1990. A few years later, Blake was commissioned to illustrate the early Dahl titles which had been published prior to their collaboration, including Charlie and the Chocolate Factory (1995 edition) and Fantastic Mr. Fox (1996 edition). Most recently, Blake has illustrated classics for The Folio Society, including The Hunchback of Notre Dame, Candide, and in 2013, 50 Fables of LaFontaine. In his magical, scratchy style, Blake has illustrated over 300 books by at least 80 different writers and the number continues to grow.

Quentin Blake’s books have won numerous prizes and awards, including the Whitbread Award, the Kate Greenaway Medal, the Emil/Kurt Maschler Award and the international Bologna Ragazzi Prize. In 1999, he was appointed the first ever Children’s Laureate, a post designed to raise the profile of children’s literature. Three years later, Blake received the Hans Christian Andersen Award for Illustration, the highest international recognition given to creators of children’s books. Additionally, in 2013, Princes Charles knighted Quentin Blake for services to illustration.