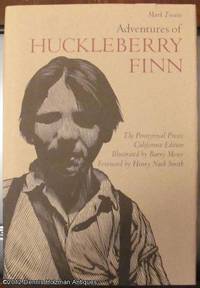 After having been educated at Auburn University and the University of Tennessee in his hometown of Chattanooga, Barry Moser (b. 1940) moved to New England around 1967 and began teaching at The Williston Academy in Easthampton, Massachusetts. Though he was trained in painting, Moser took a new interest in etching and wood engraving around this time and soon devoted himself to learning, and later teaching, the crafts. However, in Moser’s first commission, Vernon Ahmadjian’s The Flowering Plants of Massachusetts (completed in 1969, but not published until 1979 by University of Massachusetts Press), the illustrations were neither painted nor engraved, but drawn with ink.

In the late 1960s, Williston’s Headmaster, Phillips Stevens, gave Moser a room in the corner of the old Easthampton railroad station to set up a print shop. After having illustrated The Flowering Plants, Moser became enamored with plants and plant lore and as a result, he named his small press after the Pennyroyal (Mentha pulegium), a flowering plant in the mint family. Moser began graduate studies in printmaking at the University of Massachusetts at Amherst and soon after, the first book bearing the Pennyroyal imprint was published: Moser’s The Death of the Narcissus (1970), a portfolio of ?botanico-erotic? etchings. Later that year, the second Pennyroyal book was published, Bacchanalia (1970), and it was the first book of the press to use wood engravings as illustrations. Over the next decade, Pennyroyal produced a few slender volumes, including Twelve American Writers (1974), a collection of quotations about writing by writers, accompanied by Moser’s wood engraved portraits of each.

In 1977, Moser was commissioned to do one hundred engravings illustrating the forthcoming Moby-Dick (1979) from Arion Press. The project reaffirmed Moser’s confidence in his own abilities and thus, influenced him to create a Pennyroyal publication that was just as grand. And shortly after, Pennyroyal press published its first large-scale work, Lewis Carroll’s Alice’s Adventures in Wonderland (1982) and subsequently won the 1983 American Book Award for it. From there, Pennyroyal published four more large-scale volumes in quick succession: Lewis Carroll’s Through the Looking Glass and What Alice Found There (1982), Mary Shelley’s Frankenstein, or the Modern Prometheus (1983), Mark Twain’s Adventures of Huckleberry Finn (1985), and . Frank Baum’s The Wonderful Wizard of Oz (1985). These editions provided Pennyroyal with enough investment support that Moser could leave Williston and become a full-time artist/printer. Unfortunately, none of the other large-scale volumes could match the sales of Pennyroyal’s Alice and the press returned to printing smaller, less ambitious volumes for the next decade.

Moser illustrated and designed over 100 books before switching his focus to children’s literature. The first children’s book he illustrated, Joel Chandler Harris’ Jump, Again! The Further Adventures of Brer Rabbit (1987) was named one of the Ten Best Illustrated Children’s Books by The New York Times as well as one of Redbook’s Best Books for Children that year. A few years later, his collaboration with Cynthia Rylant, Appalachia, the Voices of Sleeping Birds (1991), won the Boston Globe-Horn Book Award, and his collaboration with Ken Kesey, Little Tricker the Squirrel Meets Big Double the Bear (1990), was named One of the Best Books of 1990?1991 by the International Board of Books for Young People. And the list goes on. Then, in the summer of 1995, Moser began working on the first of 233 illustrations for the Pennyroyal Caxton Bible (1999). Moser is the only artist to execute a single, coherent, illustrated edition of the Bible as a solo project since Gustave Dor� in 1866. His work from the project was featured in the only one-man exhibit ever to be mounted at the Library of National Gallery of Art in Washington D.C. by a living artist. Pennyroyal Caxton Bible now sells for $10,000 ($30,000 for a deluxe edition).

Barry Moser is currently Professor in Residence and Printer to the College at Smith College in Northampton, Massachusetts. He also teaches Life Drawing at the Glen East Workshop, held every summer at Pioneer Valley, MA. Some of his more recent illustration projects range from Literary Genius (2005) from Tehabi Press, which portrays twenty-five major British-American writers and illustrates their works, to Three Silly Billies (2005) from Simon & Schuster, an off-the-wall retelling of the Billy Goat Gruff story.