Join us June 2–June 4, 2022 for our second virtual antiquarian book fair!
Preregister now for Biblio.live and get $10 to use at the fair.
home rare books Bibles More Rare Books from Les Enluminures Sermones de sanctis et de commune sanctorum [Sermons for the Sanctorale and for the Common of Saints]; Speculum… 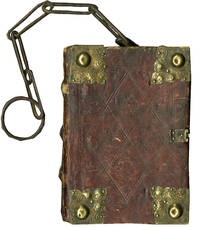 Sermones de sanctis et de commune sanctorum [Sermons for the Sanctorale and for the Common of Saints]; Speculum Beatae Virginis Mariae [Mirror of the Blessed Virgin Mary]; in Latin, decorated manuscript on parchment with an intact medieval chained binding

by CONRAD OF SAXONY

MEDIEVAL SERMON MANUSCRIPT IN A FIFTEENTH-CENTURY CHAINED BINDING, CHAIN INTACT, decorated manuscript on parchment, in Latin, Austria (Vienna?) or Southern Germany, c. 1275-1300. 182 x 127 mm. 190 folios, complete, written in a rapid Gothic hand with cursive influence in two columns of thirty-two to thirty-seven lines (justification, 141-143 x 96-100 mm.), parchment ruled in brown ink, quire signatures, guide notes for rubrication, red rubrics, capitals and names of cited authorities stroked in red, rhymed phrases underlined in red, red paraphs, two- to three-line plain red initials, two-line red initial with pen flourishing in red (f. 131v), occasional scribal corrections and marginalia. BINDING: Fifteenth-century blind-tooled and -stamped red calf with eight engraved and bossed cornerpieces, intact fore-edge clasp, and chain hasp with intact chain, with two manuscript fragments serving as front flyleaf and lower pastedown. Chained libraries were a late medieval solution to the problem of providing access to needed books in an institution, while at the same time preventing theft, and we can assume many late medieval volumes were once chained. Most, however, have been rebound, or survive without the chain and other metalwork, and intact chained bindings such as this one are uncommon. TEXT: This extensive collection includes more than one hundred sermons from the Sermones de sanctis et de communi sanctorum of the early Franciscan writer, Conrad of Saxony (d. 1279), together with his very popular text, the Speculum beatae Mariae virginis, all copied not long after their composition. This is, however, not simply a copy of Conrad's sermon cycle, since some of his sermons are omitted, and six sermons by contemporary Dominican authors (Martinus Polonus, Aldobrandinus de Calvacantibus, and Antonius Azaro de Parma), as well as eight sermons by unidentified authors were also included. It seems likely this is an example of a re-working of Conrad's texts for a Dominican audience, who would have prized it as a preaching aid and for its pronounced Marian focus. Marginal annotations attest to the early use of these sermons, most likely by preachers. PROVENANCE: Written in Southern Germany or Austria at the end of the thirteenth century, as suggested by evidence of spelling, script, and decoration. Belonged to the Dominican house attached to the Church of St. Maria Rotunda in Vienna, as indicated by two fifteenth-century inscriptions; here it was probably part of the house's chained library. Belonged to a Dominican convent at Kosiče, in present-day Slovakia, as indicated by a sixteenth-century(?) inscription. Belonged to Maurice Burrus (1882-1959), Alsatian philatelist; his ex libris on the front pastedown. CONDITION: Slight rust stains and corrosion in the outer margins of ff. 184-188, margins trimmed away, overall in good condition. Full description and photographs available (TM 767).

rebound
A book in which the pages have been bound into a covering replacing the original covering issued by the publisher.
marginalia
Marginalia, in brief, are notes written in the margins, or beside the text of a book by a previous owner. This is very... [more]
Parchment
Pages or book covering made from a prepared animal skin. Parchment describes any animal skin used for books, while vellum is a... [more]
calf
Calf or calf hide is a common form of leather binding. Calf binding is naturally a light brown but there are ways to treat the... [more]