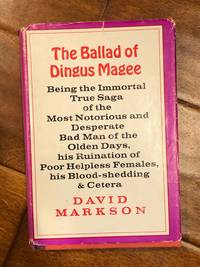 Description:
Although best known today for his singular, stunning "anti-novels" dazzlingly conjured from anecdotes, quotes, and small thoughts, in his early days David Markson paid the rent by writing punchy, highly dramatic fictions. On the heels of a new double edition of his steamy noirs Epitaph for a Tramp and Epitaph for a Deadbeat comes a new edition of his 1965 classic The Ballad of Dingus Magee,
whose subtitle ŌĆö "Immortal True Saga of the Most Notorious and Desperate Bad Man of the Olden Days, his Blood-Shedding, his Ruination of Poor Helpless Females, & Cetera" ŌĆö gives readers a hint of the raucous sensibility at work here. Brimming with blasphemy, bullets, and bordellos, this hilarious tale, which inspired the Frank Sinatra movie Dirty Dingus McGee, shows the early Markson at his outrageous best, taking down, as Playboy put it, "the breeches of the Old West and blast[ing] what's exposed with buckshot."
Item Price:
£11.30
£2.26 shipping to USA

Try adding this search to your want list. Millions of books are added to our site everyday and when we find one that matches your search, weŌĆÖll send you an e-mail. Best of all, itŌĆÖs free.

Join the BibliophileŌĆÖs Club and save 10% on every purchase, every day — up to $25 savings per order!