Description:
Includes an early 1963-1964 Vietnam photograph album during the period President Kennedy began to increase in-country U.S. military presence.
This archive consists of official paperwork, certificates, letters, and a photograph album that belonged to Lieutenant Colonel Carl L. Palmer.
The photograph album contains over 50 corner-mounted photographs ranging in size from 3.5" x 5" to 8" x 10". About 25 additional photographs are laid-in. Most of this grouping is in nice shape, however, the photograph album is missing its front cover and many of the images have significant humidity damage. The photographs appear to have been rearranged on the album pages several times.
The documents begin with Palmer's initial World War II physical exam in 1942 and end with a civilian "Reduction in Force" notification in 1976. In between are oaths of office, military school diplomas, promotion certificates, a Purple Heart award, several letters (including one notifying Palmer of a comrade's death in a Vietnam firefight… Read more
Item Price:
£1,328.43
FREE shipping to USA 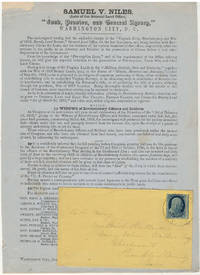 Description:
Washington, DC, 1857. Envelope or Cover. Very good. This handbill advertisement measures approximately 8" x 10 and is printed on light blue paper. Its accompanying mailing envelope is addressed "To the Heirs of Mrs. Ruth Bullard." The envelope is franked with a straddle copy of a one-cent blue Franklin stamp (Scott #24) that a previous owner has identified as coming from plate position 100L8. The stamp is tied to the cover with and indistinct circular postmark. Both advertisement and envelope are in nice shape. The advertisement has mailing folds and is loosely mounted to thin cardstock; the adhesive is likely water soluble and the handbill could probably be removed with minimal if any damage. The federal government provided bounty land for those who served in the Revolutionary War, the War of 1812, the Mexican War, and Indian wars between 1775 and 1855. It was first offered as an incentive to serve in the military and later as a reward for service. The land could be claimed by veterans or their… Read more
Item Price:
£113.87
FREE shipping to USA 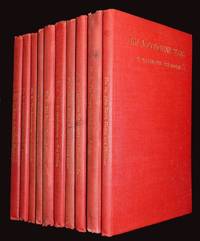 Description:
New York: Francis P. Harper, 1901. First Edition, Limited. Hard Cover. Very good. 12mo. 10 volume first printing set limited to 250 copies. Each volume is in red cloth with gilt lettering and uncut pages. Tight bindings with sound hinges. Clean pages with occasional finger smudges or pencil annotations. Some minor wear and soiling to covers; light sunning to the spines. Once the property of the Mercantile Library of New York, with handstamps with "Removed" and "LibX" annotations in pencil. Some dampstaining to Volume 2. The ten volumes are: The Origin of the Name Manhattan, Indian Name Places in the Borough of Brooklyn, The Names of Susquehanna and Chesapeake, Indian Names for Long Island, The Algonquian Names of the Siouan Tribes of Virginia, The Bocootawanaukes or The Fire Nation, Some Indian Fishing Stations Upon Long Island, The Algonquian Terms Patawomeke (Potomac) and Massawomeke, The Names Chickahominy, Pamunkey, and the Kuskarawaokes of Captain John Smith, and The Significance of John… Read more
Item Price:
£759.10
FREE shipping to USA

Description:
Detroit: John C. Goodrich, 1895. Envelope or Cover. Good to Very Good. This advertising cover incorporates nine small drawings: five of the toy top and four of Palmer Cox's Brownies playing with the toy top. The envelope is franked with a one-cent blue Franklin stamp (Scott Type A87) that is tied to the cover by a Barry machine cancel. The cover is in nice shape, however the stamp has several pulled and worn perforations. The toy illustrations are titled "Bottom View," "Top View," "Holder," "Ready for Variegated Colors," and "Start in this manner." The Brownie illustrations are titled "We Want Tops," "Playing a Trick," "Whistle," and "Watching Variegate Colors." Text accompanying the illustrations reads "Made of Brass and Nickel Plated. No Strings or Springs to break, wear out or get lost. It's a dandy, and don't you forget it.". Contemporary advertisements in Scientific American state that the top "changes color while going." Making tops was apparently not Goodrich's principal occupation as… Read more
Item Price:
£94.89
FREE shipping to USA 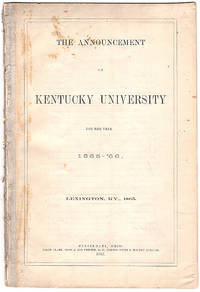 Description:
Cincinnati: Caleb Clark Book & Job Printer, 1865. Wraps. Very good. Complete 24-page pamphlet. Sound binding. Removed from a sammelband so a little rough along the left edge. Minor soiling to the cover, otherwise in nice shape. In 1780, before Kentucky was a state, the Virginia Assembly (perhaps prodded by Governor Thomas Jefferson) chartered Transylvania Seminary, then affiliated with the Episcopal Church, as the first college west of the Allegheny Mountains. It began in a log cabin in Boyle County and moved to Lexington in 1789. Ten years later, it changed its name to Transylvania University. By 1818, it included a medical school, a law school, a divinity school, and a college of arts and sciences. About the same time, Bacon College of Georgetown was established and it soon changed its name to Kentucky University. At the end of the Civil War, both Kentucky University and Transylvania University were in dire financial straits, and the state legislature approved a merger in hopes of solving… Read more
Item Price:
£189.78
FREE shipping to USA

Description:
New York: Limited Editions Club, 1952. Hard Cover. Near Fine. Szyk, Arthur. 4to. Four-volume set (two volumes of text/illustrations plus two volumes of notes), Limited edition, #309 of 1500. 60 multi-color illustrations. Black linen covers with gilt decoration. Housed in two black slipcases. Includes the original advertisement and newsletter. Sound bindings with intact hinges. Slight foxing to edges of the text blocks on two volumes. Almost no wear to the covers; the gold decorations are bright, fresh, and unrubbed which is quite the exception for this set. The slip cases have some minor wear at their corners. Burton's definitive translation of 65 of the 1001 stories told by Scheherazade the Sultaness to divert Shahryar the Sultan from executing her as he had previously done to hundreds of his other wives. Coupled with the marvelous illustrations of Arthur Szyk.
Item Price:
£455.46
FREE shipping to USA 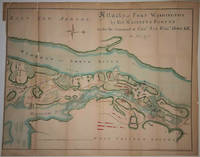 Description:
New York: For D.T. Valentine's Manual for 1861 by Geo Haywood, 1861. Disbound. Very good. The hand-colored, lithographed map image measures 22" x 16.5" and has a 7/8" margin at top, a 5/8" margin on the right and bottom, and a 1/8" margin along most of the left edge where it had been trimmed when bound into David T. Valentine's Manual of the Common Council of the City of New York. It is oriented with north to the right. Hachures show relief, and military units are depicted in red and blue. The map was said to have been "copied from an original map kindly loaned to the compiler by Mr. A. Suart." There is some light toning along the binding folds and sheet edges. Some of the folds have short splits. There is a small (1/4") hole above the 's' in "Hudson's" and a ¾" closed tear at the left edge of the Hudson River. On 16 November 1776, the Hessian General Wilhelm von Knyphausen and his army of 8,000 German mercenaries and British regulars attacked Fort Washington (now the location of Bennet Park… Read more
Item Price:
£303.64
FREE shipping to USA 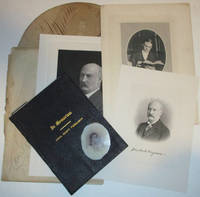 Description:
Belmont Farm, Leesburg, Virginia, 1915. Good to Very Good. This archive is of items related to Ferguson and his family. It consists of An unframed 1860 debating team oval plaque is 12" x 14". It is titled "Addisonian Contestants March 8, 1860 / Allegheny City College" and filled with calligraphic scrollwork. Each of its four oval albumin photographs measure 2.5" x 3.5" of the Debater, Essayest (J. S. Ferguson), Delaimer, and Orator. The photographs have faded; there is a crease at the top, and it is lightly soiled and toned. A circa 1900 opalotype (milk glass photograph) of a young Anna Louis Ferguson (daughter of J. S. Ferguson) roughly cut into a 2" x 3" oval that is attached to a metal hanger and has a neatly-cut protective glass cover. Its frame is missing. The opalotype is in nice shape with an accompanying note reads, "Mrs. Wm Rogers . . . who many years ago restored Belmont for a summer home." 20 scrapbook pages ranging from 1883 to 1914 and contain articles, clippings, and obituaries.… Read more
Item Price:
£189.78
FREE shipping to USA