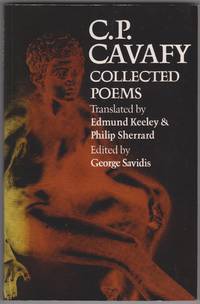 Description:
Princeton U, 1980. 6th trade paperback printing. Condition: Near fine, very light edge wear, price sticker on rear cover.Translated by Edmund Kelley and Philip Sherrard, editied by George Savidis.C. P. Cavafy (1863-1933) lived in relative obscurity in Alexandria, and a collected edition of his poems was not published until after his death. Now, however, he is regarded as one the most important figures in twentieth-century Greek poetry, and his poems are considered among the most powerful in modern European literature.Here is a revised edition of the acclaimed translations of Edmund Keeley and Philip Sherrard, which capture Cavafy's mixture of formal and idiomatic use of language and preserve the immediacy of his frank treatment of homosexual themes, his brilliant re-creation of history, and his astute political ironies.
Item Price
US$5.24
US$12.07 shipping to USA 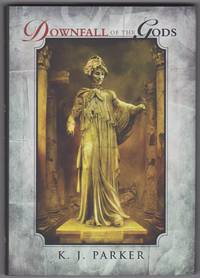 Description:
Condition: Fine in near fine dust jacket. Signed, numbered, and limited edition; number 766 of 1000 copies.A goddess has to do what a goddess has to do.And in World Fantasy Award winner K.J. Parker's sharply inventive new novella Downfall of the Gods that means everything from soothing supernatural egos to accompanying the argumentative Lord Achias on an epic quest to save his soul...and get her own way.
Item Price
US$45.25
US$12.07 shipping to USA 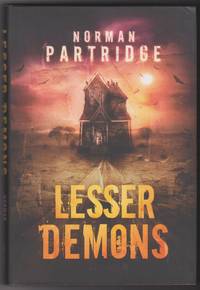 Description:
Subterranean Press, Burton MI, 2010. First edition. Condition: Near fine in near fine dust jacket. Slight edge wear on dust jacket.From the publisher: While the sun blisters a dying world, a mutant spider battles a squad of toy soldiers and a plastic cowboy on his last ride...A gangster, a sheriff, and a mysterious traveler face an army of mechanical vampires burrowing up from hell itself during a wild Montana storm...In a desert poisoned by atomic radiation, an abused boy stands between a rampaging giant and the hunter who would make him a grisly trophy...Beneath a full Arizona moon, a drifter faces a pack of merciless human animals and the werewolf who butchered his sister...In the American West, a legendary gunslinger delivers a cursed bounty to the one-horse town where his partner's ghost awaits...Tales of hardboiled horror and Twilight Zone noir. Cross-genre blowtorches with bad guys and worse guys. Love stories both dark and bittersweet. A brand new novella and extensive story notes. You'll find… Read more
Item Price
US$13.54
US$12.07 shipping to USA 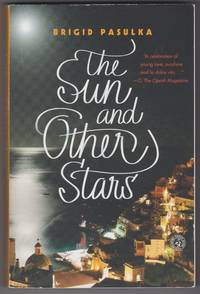 Description:
Simon & Schuster, New York, 2015. First trade paperback edition. Condition: Very good, light edge and corner wear, spine creasing.Set in a seaside village on the Italian Riviera, this irresistible new novel by PEN/Hemingway Award-winner Brigid Pasulka tells the story of a widowed butcher and his son whose losses are transformed into love.After losing his brother and mother within a year, twenty-two-year-old Etto finds himself adrift in his hometown, where every man's life revolves around soccer, except for his. Frustrated and lonely, Etto is faced with the seemingly impossible prospect of cobbling together the remaining pieces of his life, including his mostly nonexistent relationship with his father, the town butcher.Things begin to change for Etto when Yuri Fil, a scandal-ridden Ukrainian soccer star and his tough-love sister, Zhuki, arrive in town, and sweep him into their universe of soccer, celebrity, laughter, and fierce loyalty. Under their influence, Etto begins to reconstruct his relationship… Read more
Item Price
US$3.73
US$12.07 shipping to USA 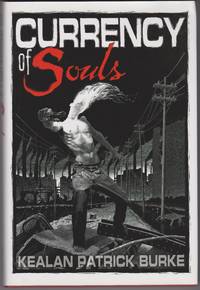 Description:
Subterranean Press, Burton MI, 2007. First edition. Condition: Fine in near fine dust jacket. Very slight edge wear on dust jacket. Signed, numbered. and limited edition; number 36 of 750 copies.Described by Publisher's Weekly as "a newcomer worth watching" Bram Stoker Award winner Burke welcomes you to Eddie's Tavern where tonight, for the patrons, nothing will go according to plan.
Item Price
US$21.12
US$12.07 shipping to USA 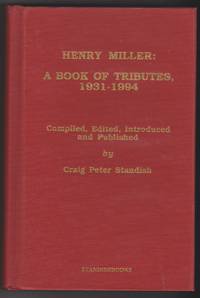 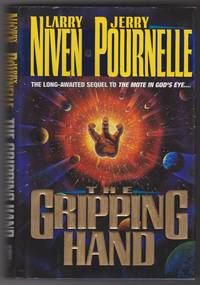 Description:
Pocket Books; New York; 1993. Condition: Near fine, light edge wear, slightly bowed.From the publisher: For the safety of mankind, the aliens called Moties have been quarantined for 25 years and are now poised to break out of their solar system and spread rapidly into humanity's space. Kevin Renner, Horace Bury, Rod Blaine and other characters introduced in The Mote In God's Eye must now find new ways to cope with the inevitable Motie expansion while trying to protect humanity. Sequel to the novel Robert A. Heinlein called "Possibly the finest science fiction novel I have ever read."
Item Price
US$7.50
US$12.07 shipping to USA 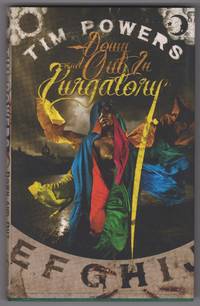 Description:
Subterranean Press, Burton MI, 2016. First edition. Condition: Fine in near fine dust jacket. Very slight edge nicks at corners. Deluxe hardcover edition.What do you do if the man you've vowed to kill dies before you can kill him?In college, Tom Holbrook worshiped Shasta DiMaio from afar, but she married the arrogant John Atwater - and Atwater eventually murdered her.All that's left for Tom uis revenge. He has devoted the rest of his life to finding Atwater and killing him - but when he finally finds him, Atwater is in a bag in the Los Angeles County morgue.How do you kill a man who has already died?
Item Price
US$18.10US$14.48
Save US$3.62!
US$12.07 shipping to USA 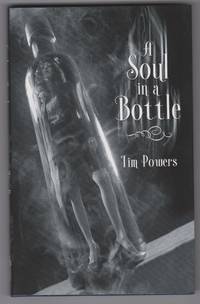 Description:
Condition: Fine in fine dust jacket. Signed, limited, and numbered edition; number 439 of 500.A first edition of a 1968 book of poems, with a sonnet that appears in no other copy - a mysterious girl with a special fountain pen, who needs a special favour - and an old woman who warns used book dealer George Sydney that helping the girl he's fallen in love with will mean that he will never have fallen in love. Hollywood Boulevard, with its bars and used book stores and the legendary Chinese Theatre, is the psychic killing ground where Sydney must learn the rules of an old supernatural rivalry - and choose to save either the woman he loves, or his soul.Includes 3 sonnets by "Cheyenne Fleming", the main character from the book. Each sonnet slip is laid in as loose pages.
Item Price
US$35.45
US$12.07 shipping to USA 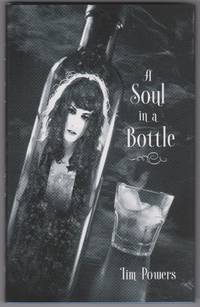 Description:
Subterranean Press, Burton MI, 2006. First edition. Condition: Fine in fine dust jacket. Deluxe hardcover edition.From the publisher: A first edition of a 1968 book of poems, with a sonnet that appears in no other copy -- a mysterious girl with a special fountain-pen, who needs a special favor -- and an old woman who warns used-book dealer George Sydney that helping the girl he's fallen in love with will mean that he will never have fallen in love. Hollywood Boulevard, with its bars and used-book stores and the legendary Chinese Theater, is the psychic killing ground where Sydney must learn the rules of an old supernatural rivalry -- and choose to save either the woman he loves, or his soul.
Item Price
US$16.59
US$12.07 shipping to USA 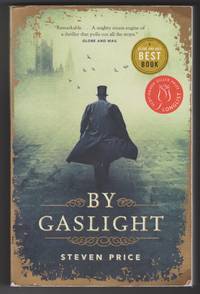 Description:
Mcclelland & Stewart, Toronto, 2017. 4th printing. Condition: Very good plus, light edge and spine wear, corner bumps.London, 1885. In a city of fog and darkness, the notorious thief Edward Shade exists only as a ghost, a fabled con, a thief of other men's futures -- a man of smoke. William Pinkerton is already famous, the son of a brutal detective, when he descends into the underworld of Victorian London in pursuit of a new lead. His father died without ever tracing Shade; William, still reeling from his loss, is determined to drag the thief out of the shadows. Adam Foole is a gentleman without a past, haunted by a love affair ten years gone. When he receives a letter from his lost beloved, he returns to London in search of her; what he learns of her fate, and its connection to the man known as Shade, will force him to confront a grief he thought long-buried. What follows is a fog-enshrouded hunt through sewers, opium dens, drawing rooms, and seance halls. Above all, it is the story of the most… Read more
Item Price
US$5.24US$4.19
Save US$1.05!
US$12.07 shipping to USA