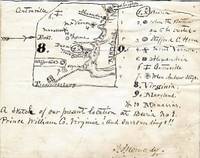 Description:
Prince William Co., VA, [ca.1861]
[CONFEDERATE MAP]. KENNEDY, Thomas Jefferson. Picturing positions along the Potomac River, south of Washington, D.C., to Fredericksburg, and west to Centreville, Manassas, and Stafford Court House in a manuscript map, captioned "A Sketch of our present location at Beeria No. 1, Prince William Co., Virginia! and surroundings!!," and signed by him.

Manuscript map, 3 x 3 inches on a larger sheet of paper (5 1/2 x 7 inches), undated [ca. 1861], ink on lined paper (mounted on stiffer paper), with a key to ten place names in the right margin. Some soiling else very good.Kennedy's camp at Beeria ('No. 1" on his key) lay between Dumfries and Cedar Run, at the mouth of which Kennedy has noted the site "where the Batteries aree to be erected." Kennedy began the war as a private in the Sumner Country Greys and later served as surgeon to the 2nd Tennessee Infantry and was with his unit at First Manassas and Shiloh.
Item Price:
£598.56
£2.24 shipping to USA 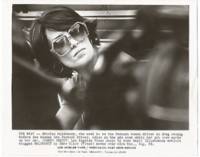 Description:
(np): Richard Kern (nd). 8 x 10 inch portrait of Lunch created by photographing her image on a video screen. Near fine. Penned in print on verso are the words Video Cover and Richard Kerns copyright stamp. A younger Lunch, staring straight at the viewer. An appropriate image for the lead singer of Teenage Jesus and the Jerks.
Item Price:
£112.23
£2.24 shipping to USA

Description:
Manhattan, Kansas: Sunflower University Press, 2001. First printing. 438 pp. Hardcover. Inscribed and dated (11/05/01) by author. Small tear to dust jacket with rubbing at head and foot of spine. 1/2" tear to dust jacket on back right and left upper corners, else very good. Key, a nephew of the admiral, uses the compendium of biographical material from Wright's journals, memos, articles, and letters - all flavored with his low-key wit. Wright had plenty to write about. His career was filled with one-of-a kind assignments, from being in charge of President Calvin Coolidge's yacht to commanding a British submarine in Wold War II (though he was neither British nor a submarine officer. A first-rate 20th Century military biography.
Item Price:
£22.45
£2.24 shipping to USA

Description:
San Francisco: The Collective & Gumption Theater, 1977. 14 x 11 1/2 inch poster for the original production featuring a b&w photo of the cast behind a chain-link & barbed-wire fence. Poster for the theatre-piece created from oral-histories and confessionals. Back in 1977, when gay liberation was still fairly new and gay-identified theater was just being born, the Gay Men's Theater Collective sparked something of a theatrical revolution with the confrontational style and confessional content of its collectively created "Crimes Against Nature." Widely regarded as one of the seminal gay theater productions, "Crimes" played for nearly two years in Santa Cruz, Toronto and New York. The impact of AIDS is particularly evident, and not just in its absence from the pre-pandemic monologues. Six of the 11 original creators and performers - Charles Solomon, Greg Kollenborn, Timo Lupine-Child, Tommy Pace, Anthony Eschbach and Martin Worman - have died of the disease in the… Read more
Item Price:
£374.10
£2.24 shipping to USA 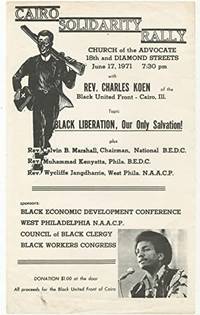 Description:
[Broadside]: Cairo Solidarity Rally, June 17, 1971 - Black Liberation, Our Only Salvation!Philadelphia, Pennsylvania, 1971. Broadside. Measuring 8.5" x 14". Near fine with scattered wear at the edges. A poster for a "Cairo Solidarity Rally" at the Church of the Advocate, Philadelphia's long-standing social activist church. The featured speaker was the radical Rev. Charles Koen of Cairo, Illinois's Black United Front. Other speakers included: Rev. Calvin B. Marshall & Rev. Muhammad Kenyatta from the Black Economic Development Conference and Rev. Wycliffe Jangdharrie from the West Philadelphia NAACP. Illustrated with a drawing of Koen carrying a Bible and gun as well as a photograph of him speaking. In the early 1990s Koen was convicted of fraud, embezzlement, and arson and in 2008 charged with stealing half a million dollars in federal funds in a training school scam. No copies found in *OCLC*, although we do locate a copy in Emory University's Black Print Culture Collection.
Item Price:
£411.51
£2.24 shipping to USA