Description:
Album documenting early 20th-century improvement projects on the Erie Canal during the construction of the New York State Barge Canal system.
This album measures approximately 7Â½ " x 10 Â½" and contains over 65 photographs ranging in size from 3Â½" x 2Â½" to 5Â¼" x 3Â¼". All have been glued to the pages. There are no captions, however, some of the photos show company names on the equipment. A slip of paper laid-in to the album identifies one of the subjects in a photo as "Daniel Sullivan / Postmaster, Ilion, N.Y." Some of the images are a little over-exposed. Light wear to the album. In nice shape.
About 60 of the photographs show in-progress construction work including workers, boats, cranes, and dredges working in concert to either extend or widen the canal. Several of the photographs show equipment from Pearson & Son, Inc. of New York City. Six additional photographs in the rear of the album show a freight train wreck, perhaps related to the project.
"In 1903, the New York State… Read more
Item Price:
£379.55
FREE shipping to USA

Description:
Four different broadsides published by the Women's Organization for Prohibition Reform.Each of the four broadsides measures 6.25" x 9.75". All are in nice shape. They are titled "Has Prohibition Brought Temperance?",
"For Your Children's Sake",
"Do You Want to Put the Criminal Out of Business? Help the Unemployed?", and
"Tax Payers! Do You Know".
While female leaders of the national temperance movement are well recognized as the driving force behind the Eighteenth Amendment, it is often overlooked that other women, specifically Pauline Morton Sabin and her Women's Organization for National Prohibition Reform (WONPR), led the charge to repeal it. Sabin, who had once supported Prohibition, set out to repeal the Eighteenth Amendment after realizing that not only had it done nothing to reduce drunkenness and alcoholism, it exacerbated the problem. She saw Prohibition as the root cause underlying most of the 1920's corruption, crime, and violence and was offended by its destruction of the principles of… Read more
Item Price:
£569.33
FREE shipping to USA

Description:
Photograph album documenting ix years in the life of an itinerate west coast laborer, whaler, and general seaman.
The album measures 15.5" x 9" and contains 100 pages with over 300 photographs (mostly 3" x 5"), several pieces of personal ephemera, about 15 newspaper or periodical clippings, and 46 different beer bottle labels. The photos are arranged in somewhat chronological order, and almost all are in nice shape; a couple are creased or torn. Everything is pasted/glued to the pages save for a few newspaper clippings. Most pages are captioned in now fading white pencil. The album is worn. The back cover has been mended and the binding cord replaced. The pages are edge-worn.
Deneen was a seaman and laborer who moved from job to job, documenting his life with a camera and occasionally selling photos and short articles to magazines, e.g., "Dangerous Static" in Science and Invention, a short photo-essay about his experience working as a steeplejack on a 600' tall radio antennae.
The album includes:… Read more
Item Price:
£1,138.65
FREE shipping to USA 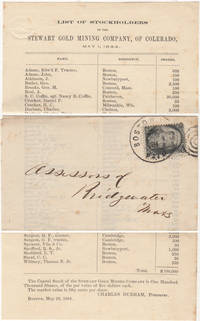 Description:
This one-page shareholder list measures approximately 5" x 8". It was printed on 28 May 1864 and mailed three days later to the "Assessors of Bridgewater, Massachusetts." It is franked with a 2-cent black Jackson stamp (Scott #73) which at the time was the pre-paid rate for sending printed materials. It bears a circular Boston/Paid postmark dated May 31. In nice shape.The Stewart Gold Mine was one of many mines to spring up in the Central City region of Colorado in wake of the Pike's Peak Gold Rush after paydirt was struck in Gregory Gulch in the late spring of 1859. By 1860, over 10,000 miners had descended upon Central City to mine the Gregory Lode and four other major veins that were subsequently found in the region: Bates, Gunnell, Kansas, and Burroughs.Most of the miners worked for companies, and in 1863, and after signing a resolution to form a "hard rock miner's union" rioted and began destroying property at the Bob Trail mine. Mining security responded and skirmished with the rioter throughout… Read more
Item Price:
£113.87
FREE shipping to USA