Dealing in fine, rare and odd books since 2009; collecting since forever.

For the Love of Books

On-line sales, offering a select stock of books with concentrations in theater, poetry, fiction, lit crit, history, and fantasy. I have been selling new, remaindered, and used books at various venues since 1986. 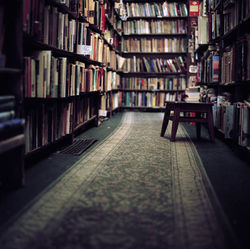 Rare & Used books on Broadway in New York City. One dollar books all the way up to signed limited first editions and antiquarian.