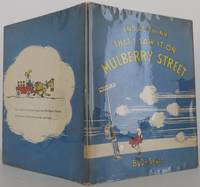 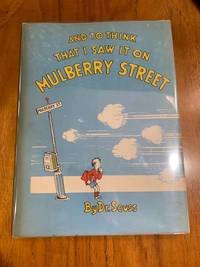 Description:
Stated 9th Printing of the first edition. Bookplate of previous owner on front fly, book near fine. Dust jacket and flaps are complete, no printed price, has small chip to top of spine, very good. Dr. Seuss first book. This book will no longer be published by the author's estate.
Item Price
US$9,500.00
US$4.50 shipping to USA 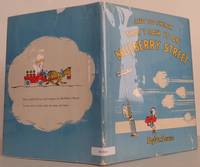 Description:
Vanugard, 1937. 5th or later Edition. Hardcover. Near Fine/Very Good. A near fine eleventh printing, with an original signed drawing by Seuss, and an inscription by Seuss, on the back corner of the front free endpaper. Near fine in a very good dust jacket. Housed in a custom-made collector's slipcase.
Item Price
US$9,000.00
US$6.00 shipping to USA 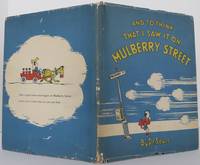 Description:
The Vanguard Press, 1937. first. hardcover. very good/very good. First edition, with 1937 on title and copyright page. This copy has the boy with blue shorts. Book very good, some spots on spine, rubbing along edges. Dust jacket very good, some wear, some small pieces missing, some closed tears. Housed in a custom-made slipcase.
Item Price
US$7,500.00
US$6.00 shipping to USA

Description:
Rare 1937 book club edition. Some wear on edged of hardcover, dust jacket missing. No torn pages or markings. One torn thread in binding.
Item Price
US$6,500.00
US$3.00 shipping to USA

Description:
Vanguard, 1937-01-01. Hardcover. Good. 1.1102 9.1299 6.5709. First edition, first printing, with no additional printings stated on the copyright page and white shorts on the cover (in later printings the shorts were blue). Lacking dust jacket. Some chipping and loss on the spine, boards with slight staining,edgewear, and rubbing. Pages lightly tanned with a few scattered spots of foxing. Over all a clean copy in good condition for its age.
Item Price
US$2,995.00
US$3.99 shipping to USA 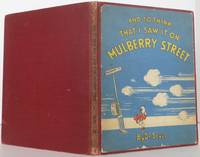 Description:
New York: Vanguard Press, 1937. First edition, first state. hardcover. Very good.. Seuss, Dr.. A very good first edition, first state, with the boy wearing white shorts (not blue) on the front cover, and the date 1937 on the title page (matching the date on the copyright page). No dust jacket. The book has been recased in cloth, but the original front panel is preserved, with the first issue white shorts.
Item Price
US$2,000.00
US$6.00 shipping to USA

Description:
New York: Vanguard Press, Inc, 1937. Book Club Edition [stated]. Hardcover. Good. Illustrated Endpapers. Illustrations (color). Cover worn. The title page contains the statement "Book Club Distribution of Beginner Book Edition distributed by Grolier Enterprises, Ind. by arrangement with the original publisher Vanguard Press, Inc." Book Club Edition printed at the bottom of the page facing the title page. This is believed to be the first Book Club Edition of Dr. Seuss's first children's book. By linking text and image, the book helps children follow the story even if they cannot read every word of the text. Theodor Seuss Geisel (1904 -1991) was an American children's author, cartoonist, illustrator, poet, animator, and filmmaker. He is known for writing and illustrating more than 60 books under the pen name Dr. Seuss. His work includes many of the most popular children's books of all time, selling over 600 million copies and being translated into more than 20 languages. Geisel adopted the name… Read more
Item Price
US$2,000.00
US$5.00 shipping to USA

Description:
NY: VANGUARD PRESS, 1937. A TRUE FIRST STATE SAME DATE ON TITLE AND COPYRIGHT PAGE NO OTHER PRINTINGS MENTIONED PRINTED AT DUENEWALD PRINTIING CO. TITLE PAGE LETTERED IN OUTLINE NOT FILLED IN WITH COLOR CHILD ON FRONT COVER IS WEARING WHITE SHORTS AND A RED JUMPER REAR COVER SHOWS A PICTURE OF A HORSE AND WAGON ENCLOSED IN A WHITE CLOUD . AN EXTEMLEY RARE FIND OF THE FIRST TITLE IN THE DR SEUSS SERIES BOOK SHOWS EXPECTED WEAR CORNERS ARE FRAYED SPINE HAS A 1 AND ONE HALF CHIP AT THE TOP AND SMALL CHIP AND CLOSED TEAR AT THE BOTTOM LOVELY BRIGHT TEXTBLOCK CLEAN UMARKED ENDPAPERS 2 PAGES HAVE SMALL FAINT SMUDGES OVERALL VERY WELL PRESERVED WITH BRIGHT VIBRANT COLORS THROUGHOUT NEAT PENCIL PREVIOUS OWNERS INSCRPITION FROM XMAS 1937 . FIRST PRINTING. HARDCOVER. Very Good/NoNE. Illus. by SEUSS DR.
Item Price
US$1,700.00
FREE shipping to USA 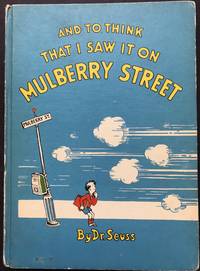 Description:
Very RareDr Seuss And To Think That I Saw It On Mulberry Street1937"BANNED"Published by Vanguard Press, Inc., New York BOOK CLUB EDITION"1937" date and no mention of later printings (See photo)A solid example of what is a rather scarce title. It was with this work that the career of the most influential author of children's books began. See photos for condition.The book shows use consistent with a book from 1937, such as wear to corners, some discoloration and staining
*Very minimal damage to the cover including scuff marks, but no holes or tears
*The majority of pages are undamaged with minimal creasing or tearing
*No underlining of text, no highlighting of text, no writing in margins
*Some discoloration and staining (See photos)
*No missing pagesDr. Seuss Enterprises, on March 2, announced it would no longer be publishing six titles by Theodor Geisel, or Dr. Seuss, because the books have been criticized for depictions of Black and Asian people.On the advice of a panel of experts and educators, the… Read more
Item Price
US$1,599.00
FREE shipping to USA

Description:
Vanguard Press, 1937. Hardcover. Very Good. in x in x in. Matte blue paper-covered illustrated boards with white spine; boy's shorts are blue. Original dust jacket with $1.25 price intact. Second printing stated. DJ has two closed tears to bottom of front panel, and one closed tear top head of spine, each about an inch; quarter-sized stain to rear panel in white area, modest edgewear and toning, but overall a ""good"" jacket that looks better than that. Book itself is quite nice, very little wear, no markings found, pages bright and fresh, binding solid. A nice copy overall of Seuss' first book, now out of print. I believe the 2nd printing was still in the same year as the first edition, but I only have that on oral authority.
Item Price
US$1,485.00
US$4.25 shipping to USA 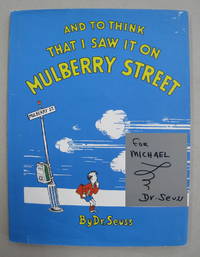 Description:
New York: The Vanguard Press, 1937. Reprint. Hardcover. Very Good in Very God dust jacket. 27.5 x 21 cm. Quarto. Blue boards in dust jacket. SIGNED by Dr. Seuss and inscribed "for Michael" opposite the title page. The previous owner had the book signed at a book signing Dr. Seuss held at Dayton's deparment store around 1977-1980. Originally published in 1937, this is a reprint circa 1980. There is a worn patch on the cover measuring ~3 x 3 cm. Light rubbing to edges of the boards. Dust jacket is price clipped and shows some light edgewear.
Item Price
US$1,350.00
US$6.00 shipping to USA 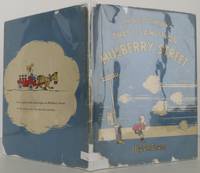 Description:
New York: Vanguard Press, 1937. 11th printing. hardcover. Near fine/Very good. Seuss, Dr.. A near fine original edition, 11th printing (so stated on copyright page). In a rare, very good dust jacket. Jacket is price-clipped. The book is almost never found with the original dust jacket intact. The original version of the contents, which led the Seuss estate to cease publication of the book. Even the most censorial censor would be hard-pressed to find anything objectionable, much less racist, in this delightful book, especially by 1937 standards. The author's first book, and a shame to think it lost to the reading world.
Item Price
US$800.00
US$6.00 shipping to USA 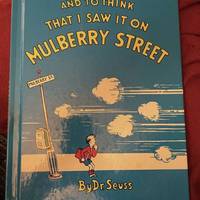 Condition
Used - Very Good
Binding
Hardcover
Quantity available
1
Seller
For The Love of Books (US)
Altamonte Springs, Florida
Seller rating:
This seller has earned a 5 of 5 Stars rating from Biblio customers.
Item Price
US$700.00
US$3.00 shipping to USA

Description:
VINTAGE "AND TO THINK THAT I SAW IT ON MULBERRY STREET" BY DR. SEUSS COPYRIGHT 1937RENEWED 1964 CONDITION: Pre-owned and in very good condition, no writing. Please review all photographs as they are part of the description.PUBLISHED BY: VANGUARD PRESS, INC., NEW YORKBOOK CLUB DISTRIBUTION BY GROLIER ENTERPRISES, INC.BY ARRANGEMENTS WITH THE ORIGINAL PUBLISHER,VANGUARD PRESS, INC.LARGE HARDCOVERGROLIER BOOK CLUB EDITIONCOPYRIGHT, 1937, BY THEODOR DEUSS GEISELRENEWED, 1964, BY THEODOR SEUSS GEISELManufactured in the United StatesJKLM4567890
Item Price
US$700.00
US$3.00 shipping to USA 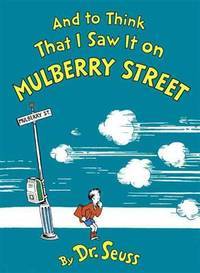 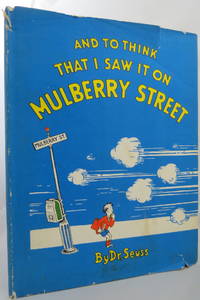 Description:
Vanguard Press. Very Good+ in Good+ dust jacket. 1937 (1964). Hardcover. 081490890X . 1964 edition. Blue pictorial cover with matte finish has light wear to corners and spine caps but clean, bright, and in very good+ condition. Boards and spine are straight. Binding is tight. Pages are clean and pristine. Dust jacket has multiple short tears and some soiling but bright and overall in good+ condition. DJ flap is price clipped. DJ protected by a brand new, clear, acid-free mylar cover. We add mylar covers to all books with DJs to preserve the DJs and add luster to magnify their beauty. (If pictured, shown without the mylar cover for an accurate representation of dust jacket. ) ; .
Item Price
US$600.00
US$4.00 shipping to USA 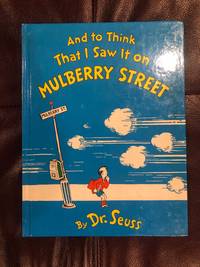 Description:
This is an excellent copy from the first printing of the 1989 Random House edition. No dust jacket as issued.Blue/white pictorial endpapers. Binding tight and straight, inner pages clean and unmarked. Please see my photos of the book and feel free to reach out to me with any questions.
Item Price
US$595.00
US$3.00 shipping to USA 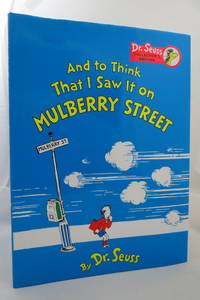 Description:
Random House. Fine+ in Near Fine dust jacket. c. 2000. Hardcover. 0375853774 . This is the first printing of the Collector's Edition. Pictorial cover is pristine. Boards and spine are straight. Binding is tight. Pages are clean and pristine. Dust jacket has light shelf rubbing along top edge but near pristine. DJ protected by a brand new, clear, acid-free mylar cover. We add mylar covers to all books with DJs to preserve the DJs and add luster to magnify their beauty. (If pictured, shown without the mylar cover for an accurate representation of dust jacket. ) ; 11.2 X 8.3 X 0.3 inches; 40 pages .
Item Price
US$400.00
US$4.00 shipping to USA