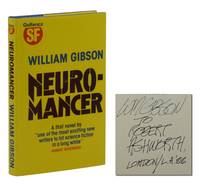 Description:
London: Victor Gollancz, 1984. First Edition. Fine/Fine. First British edition, first printing; first hardcover edition. Signed by William Gibson on the title page and inscribed to a former owner. Bound in publisher's original blue cloth-affect boards with spine lettered in gilt. Near Fine, with light wear to spine ends. In a Near Fine dust jacket with slight sunning to spine, light spidering to surface laminate, and several scratches with light corresponding indentations to the boards there as well. Gibson's first novel, winner of the Nebula, Hugo and Philip K. Dick Award, and has been credited with starting the Cyberpunk genre.
Item Price:
£10,265.00
FREE shipping to USA 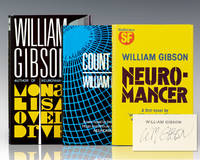 Description:
London: Victor Gollancz, 1984-1988. First British editions and true firsts of each of the novels that comprise Gibson's The Sprawl Trilogy. Octavo, three volumes. Each signed on the title page by William Gibson. Neuromancer is a review copy, with a slip laid into it. Each are fine in fine dust jackets. Rare and desirable signed and in this condition. Neuromancer, the beginning of the Sprawl trilogy, was the first winner of the science-fiction "triple crown:" the Nebula Award, the Philip K. Dick Award, and the Hugo Award. Gibson coined the term "cyberspace," in this book, "described as "a three dimensional representation of computer data through which users communicate and do business, alongside a whole host of more dubious activities.
Item Price:
£9,854.40
FREE shipping to USA 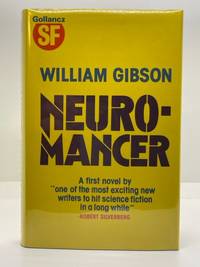 Description:
A like new first edition first printing in dust jacket. It is the only novel to win the NEBULA AWARD, the Philip K. Dick Award, and the Hugo AwardOne of the top 5 Science Fiction
Item Price:
£4,927.20
£4.93 shipping to USA

Description:
Arbor House; Bantam Books; The Berkeley Publishing Group; Victor Gollancz Ltd. An collection of works written by William Gibson, an author widely considered to be the chief architect of the science fiction genre. Five items, all signed first editions. The novels within this collection include: Neuromancer. New York: The Berkeley Publishing Group, 1984. "He coined the word "cyberspace" and popularized the concept through his 1984 debut novel, Neuromancer, well before the internet transformed human communication and daily life. He was crowned a prophet of the information age and has been credited with foreseeing the ways technology shapes our identity, and the rise of reality television and technological innovations like Google Glass" (The New York Times). "On its release, Neuromancer won the 'big three' for science fiction: the Nebula, Philip K Dick and Hugo awards. It sold more than six million copies and launched an entire aesthetic: cyberpunk. In… Read more
Item Price:
£3,079.50
£4.11 shipping to USA 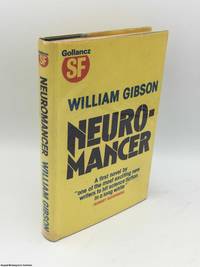 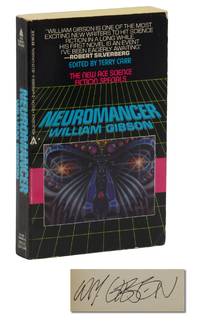 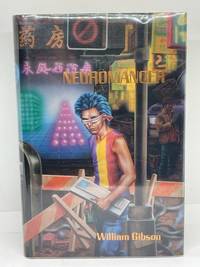 Description:
U.S.A.: Ace Books, 2004. Book. Fine. Hardcover. Signed by Author(s). 1ST. Outstanding Copy - Signed By The Author On The Title Page. A First Edition, First Printing. Book Is In Fine Condition. Boards Are Clean, Not Bumped. Fore Edges Are Clean. Interior Is Clean And Legible. Not Remaindered. Dust Jacket Is In Fine Condition. Not Chipped Or Crinkled. Not Price Clipped. Dust Jacket Is Covered By Mylar Brodart. Thanks And Enjoy..
Item Price:
£369.54
£3.28 shipping to USA